Courses hosting the British Open are close to their maximum length, according to R&A CEO Peter Dawson.

This year’s British Open championship at Royal Lytham and St. Annes will play 181 yards longer than when American David Duval won the 2001 British Open when it was last staged at the Lancashire County course. 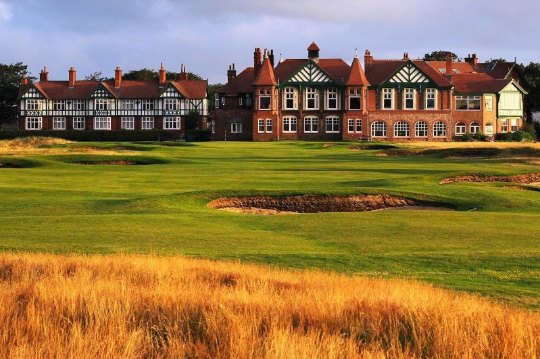 “We are very close to the maximum length that allows us to extend all the Open Championship venues,” said Dawson.

“Royal Lytham has been lengthened 181 yards compared to the last time we are here and that’s two-and-a-half percent.”

“So instead of hitting it 100 yards the players will now have to hit it 102 and a half yards.

“But the course will still be a challenge for the modern player and players will have to remember there are more than 200 bunkers on Royal Lytham.”

Dawson, in his now annual pre-British Open press conference, revealed there had been three significant changes to the course and dealing with the seventh, 10th and 11th holes.

“The par five 7th hole has had 35 yards added to it while there has been a completely new green installed and is now positioned about 20 yards from where it was in 2001,” said Dawson.

“The 10th has been lengthened by 52 yards and we have installed a new raised tee at the par four 11th while the hole will now play at 592 yards and that is 56 yards longer than it was before.”

In fact, there are only two holes on the course that players will find have not been changed and that is the par four, 4th and par three 12th holes.

Dawson also has put home TV host BBC right under pressure with regards to the renewal of their contract to televise the British Open. The BBC contract is up for renewal at the end of 2016.

At the moment the BBC coverage of golf is very limited with the TV network covering the British Open, the BMW PGA and the Scottish Open.

But from 2013 the BBC is dropping TV coverage of the BMW PGA at Wentworth and the Scottish Open.

“Given the present financial constraints at the BBC it is a concern for coverage of the Open Championship going forward,” said Dawson.

“They know we have an eye on that and besides they need to be in the practice of covering golf to do it well.”

Dawson was also asked his reaction to hearing former England Ashes cricket winning captain, Michael Vaughan being used by BBC TV as an analyst during their Masters coverage.

“That seemed rather unusual,” said Dawson.

And in a major change of practice, Dawson indicated that spectators attending this year’s British Open would be allowed to bring mobile phones with them to the course.

The R&A first banned the use of bringing phones to The Open in 2007 at Carnoustie.

“Spectators will be allowed to bring their mobile phones with them this year as there will be designated sites where they can use them,” said Dawson.

“We have taken advice from the various tours and spectators so we have taken the opportunity to reintroduce them.”

“We had taken the decision to ban them quite reluctantly some years ago and while we know it will not be easy for marshals, we are allowing them back on the course, based on trust.”

“We are also hoping there will be peer group pressure if people do use the phone in places where they shouldn’t.”