Brown back from the brink after Portugal Masters win

England’s Steven Brown carded a final-round 66 to finish on 17-under-par to win his first title on the European Tour at the Portugal Masters on Sunday.

Brown claimed his maiden title by a stroke from South Africa’s Justin Walters and Brandon Stone. 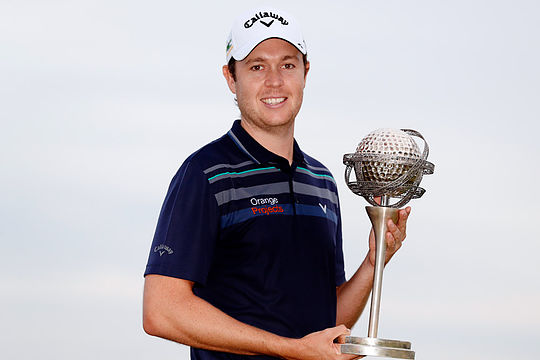 The 32-year old Englishman had arrived earlier ranked 150th on the Race to Dubai and was looking at another visit to tour school, which is seven so far, in his eight-year professional career.

Brown, whose closing rounds of 67-65-66 all beat his season’s best of 68, has with Sunday’s result earned a two-year European Tour exemption. His move to 61 on the money list means he qualifies for the upcoming Turkish Airlines Open, the first of three post-season playoff tournaments.

“You just never know with this game… I never thought this was going to happen,” said Brown. “I was just counting down ready for Tour School to get my game ready for that.”

“The last few weeks, I’ve had a calmness in my head. Even today I liked the fact that I had to go for it and I wasn’t just trying to have a good result. That’s probably the difference.”

Jake McLeod was the best of the Australians finishing in a group of six who shared eighth position on 12-under-par after a final-round 63. Earlier, McLeod had opened with rounds of 65-72-72.

Nick Cullen shared 40th position at 6-under-par to be the next best placed Australian, with Min Woo Lee in a share of 63rd position at 1-under-par and the last of the Aussies to make the cut.

The 32-year-old Brown was a member of Great Britain and Ireland’s Walker Cup team in 2011 and started the week ranked 550th in the world. He needed a top-three finish in the Tour’s last full-field event of the season to climb into the top-115 and retain his playing privileges for 2020.

Brown previously had not finished higher than 11th all year and had missed 18 tournament cuts before Sunday’s breakthrough victory.

What a difference a week can make in professional golf and Brown can relaxed that he was not one of the casualties with the season ender.

Dunn’s case is heart wrenching and reflective of how difficult and cruel professional golf can be. After finishing tied 4th at the Made to Denmark in September Dunn, 26, looked certain to retain his playing privileges.

But on Sunday the Irishman missed the cut for the 12th time in 14 starts and the 2017 British Masters champion has lost his tour card for next season.