Victorian Anthony Brown has fired a course record equalling round at Brookwater Golf and Country Club to lead the Isuzu Queensland Open.

Brown fired a 7-under 65 for a one shot lead from Queensland amateur Kade McBride after the first round. 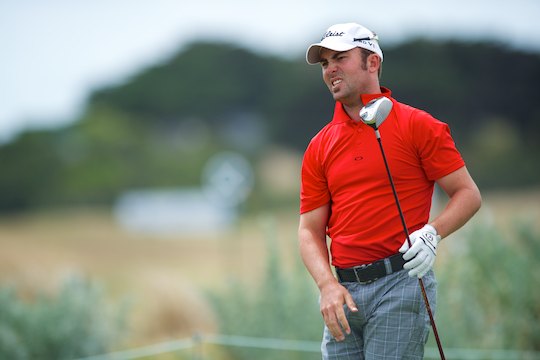 Starting on the 1st hole in the afternoon field, Brown’s round started to heat up with four consecutive birdies on holes five through eight.

“I didn’t have high expectations. If you make three birdies around here it’s good but I made a couple early and that set the tone for the day,” said Brown.

“I did everything right off the tee, gave myself some good chances on the greens and holed some nice putts.”

An eagle on the par-5 13th was the highlight of the round for the Victorian who looked set to break the course record, set by Nick Cullen last year, before finishing his round with a bogey.

“I birdied 12, chipped in for eagle on 13 to go to 7-under and then birdied 17 to go to eight. Unfortunately, a slight hiccup on the 18th but still a very good day,” added Brown who struggled on the course in 2013.

“I’ve never broken 70 at Brookwater in the past. It is a tough course even with no wind, it’s so penal.”

Playing in the morning field McBride set the early pace and was impressed with his score in the tough conditions.

“I’ve only played here about five times but have a good understanding of the course,’’ said McBride.

“I feel I played well considering the wind. I drove the ball well and putted pretty good.’’

On greens made receptive by overnight rain, McBride holed a number of long putts to kick start his round.

At 5-under the card and tied third is Victorian David Bransdon and South Australian Tom Bond who led after the first round last year.

Rounding out the top-5 on 3-under 69 is Victorian Scott Laycock, New South Welshman Adam Stephens and New Zealand Pieter Zwart.

Defending champion Nick Cullen opened his title defence with a 1-under 71 to be tied 10th heading into Friday.