Bryson DeChambeau has exceeded all expectations including his own in making the top-8 in his first attempt at the Long Drive World Championships in Nevada.

Just days after helping the US to their first Ryder Cup win since 2016 and only their third title this century, the big-hitting rookie let rip on day one with a 412-yard (377m) monster and his longest drive of the week.

From there DeChambeau managed to cross the 400-yard (365m) mark another eight times across the week before being bundled out on the final day.

“I’m definitely going to continue to keep doing this, and I think these guys that are bigger, better, faster, stronger than me are going to keep pushing me to go faster,” said DeChambeau. 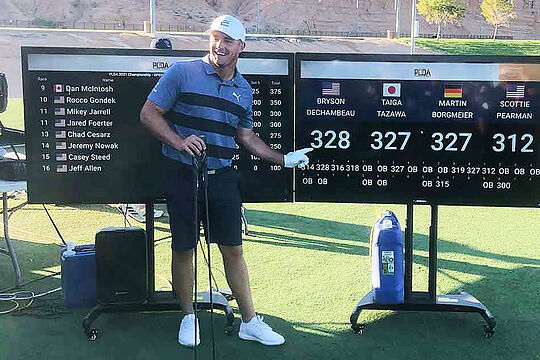 “And I think this is going to translate over really, really well to the PGA Tour.”

Even if you’re not a fan of the World No.7, there’s no denying his athleticism. There’s not many PGA Tour players, who could have pulled this off, both physically and mentally, especially after the rigours of a full PGA Tour season and a week of Ryder Cup golf.

With the 28-year-old just nine metres short of the World Championship mark set by Berkshire, you can bet this won’t be the last time we see DeChambeau taking on the world’s best…and winning.