The final 90 minutes of the WGC-HSBC Champions showcased the entire package that makes Bubba Watson such a mesmerising figure in golf, as the 36-year old pulled not one, but two rabbits out of the hat on the 18th hole to win a play-off with Tim Clark in Shanghai.

Two shots clear with three holes to play at the Sheshan International course, including the very reachable par-five 18th, Watson made things interesting by bogeying the 16th before taking a calamitous double bogey on the 17th, after leaving his first bunker shot in the sand.

The three-stroke slide dropped the Masters champion a shot behind playing partners Clark and Rickie Fowler, as well as the final group of Graeme McDowell, Hiroshi Iwata and Martin Kaymer.

After bombing his tee shot down the 18th, Watson carved an iron approach into the greenside bunker and faced a long bunker shot over the sand with water lurking beyond the flag.

With Clark wedging cosily to within five feet for birdie, what followed was Watson at his magnetic best: holing his bunker shot for an eagle and forcing Clark to hole his putt to join him at 11-under. 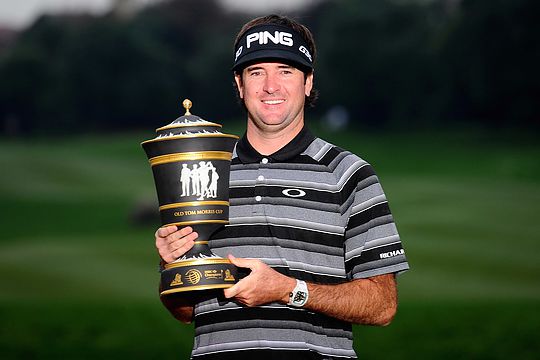 “It was one of those lifetime kind of shots. I didn’t know how to react and so I just kind of screamed and I lost my voice a little bit,” said Watson.

When none of the final group could advance their totals, Clark and Watson returned to the 18th for the play-off where Watson found the same greenside bunker with his second shot.

Clark hit an average approach by his standards to around 25 feet and Watson was just able to edge inside that mark with his trap shot.

After Clark left his putt short, Watson lagged his putt from outside 20 feet down the slope and into the hole for his first WGC title and first victory outside the United States.

“For me this is the big one,” the reigning Masters champion said of his third win of 2014. “It’s very big because I always wanted to win outside the US.”

“It’s my seventh win, gets me closer to ten wins which has always been my goal. It’s a World Golf Championship, so when you add it all up it means a lot.”

Clark was left to rue missing a short birdie putt on the 16th but the South African said: “I never expected to be in this position at the start of the week. I fought hard. I knew I needed to birdie that play-off hole, especially with him (Watson) being able to reach.”

McDowell, Iwata and Fowler tied for third at 10-under with Perth International champion Thorbjorn Olesen, Ian Poulter and Kaymer two strokes further back tied for 6th.

Victorian Marc Leishman shot a three-under 69 in the final round to finish in outright 9th place while Adam Scott never quite got back on track after a promising start to his second round was pole axed with a quadruple bogey 9 on the 8th, followed by a double bogey at the 9th.