Casey shot a final round five-under-par 65 to tie with Watson, who finished with a 67, for a 16-under-par total. Both managed par on the first playoff hole before Watson won with a birdie on the next. It was Watson’s second win of the season, having captured the World Golf Championship-HSBC Champions title. 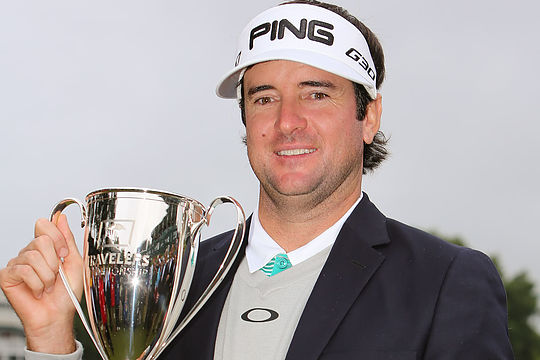 Watson also needed extra holes to win the WGC-HSBC Champions in China in November and won the Travelers in 2010 in a three-way playoff for his first win on the PGA Tour.

“It’s just about staying calm,” he said. “That’s what you have to do. You just breathe and walk slower, take some deep breaths and focus on the fact that no matter what you still come in second place.”

Watson had a chance to win in regulation, but the two-time Masters champion bogeyed the 17th while Casey closed with three birdies on the final five holes.

An eight-time PGA Tour winner and two-time Masters champion (2012-14), Watson’s career goal is to bag 10 wins. Of all the players to win on the PGA Tour, only 108 have gotten to that number.

Yet since 2010, Watson is the equal second biggest winner on tour having won eight times along with Tiger Woods – Rory McIlroy leads the way with 11 wins. In a three-year span, Watson won two Masters titles, an accomplishment only achieved by three other players, namely Jack Nicklaus, Phil Mickelson, and Tiger Woods.

“My whole goal in my career was to get 10 wins,” Watson said on Sunday after taking his second Travelers Championship.

“I needed two more wins. I felt like in this day and age with the talent level all across the world, everybody playing the game of golf, that 10 is a big number to get double digit wins on the PGA Tour with as many players that are winning, all the talent, all the people know how to prepare now.”

Watson is 36 and will have to secure as many wins in the next few seasons if it’s to be done at all. The modern day golf era sees the ’20-somethings’ winning more often with Jordan Spieth and Rory McIlroy currently dominating the majors.

The best placed Australian was Steven Bowditch who shot a final day 66 to finish in 15th spot. His nine-under-par total was seven shots behind Casey and Watson.

Marc Leishman and Cameron Smith finished three shots behind Bowditch for a tie for 39th, after shooting final rounds of 69 and 68 respectively.

The PGA Tour now moves to West Virginia for the US$6.7m Greenbrier Classic, the site of Stuart Appleby’s historic victory in 2010 after shooting only the fifth round of 59 in PGA Tour history.