American Hayden Buckley, who only got a place in the tournament as a last-minute alternate, has won the LECOM Suncoast Classic in Lakewood Ranch.

Following 72 holes of play, Buckley sat tied at 13-under-par with Taylor Montgomery and Dawson Armstrong, with the 24-year-old Buckley charging out fo the gate with a birdie on the par-4 18th hole to win on the first hole of sudden death. 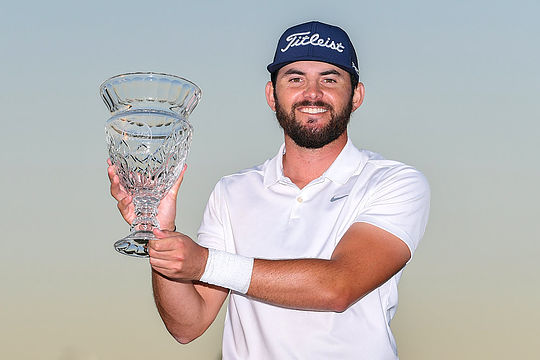 “I know I belong out here,” remarked Buckley following his victory. “I’m just waiting for my chance. It’s just a matter of time. I am playing consistently.”

Buckley was the last player in the field and learned he had gained entry into the field approximately 15 minutes before his tee time early on Thursday morning. With little warmup he proceeded to open the tournament with a bogey-free 68 before carding rounds of 65-68-70.

What’s In The Bag – Hayden Buckley

With the win, Buckley leaps from 85th to 27th in the points standings and his world ranking moves from 542nd to a career-high of 283rd.

This is his rookie season on the Korn Ferry Tour after a year on Canada’s Mackenzie Tour in 2019.

During the 2019 season on the Mackenzie Tour, Buckley played in all 12 tour events, making 11 cuts and recording 6 top-10 finishes including winning the ATB Financial Classic.

Prior to that, Buckley attended the University of Missouri where he began as a walk-on and left with the lowest scoring average in the program’s history.

Brett Coletta finished the best of the Australians in a share of 11th position after sharing the opening round lead firing an impressive 8-under 63 for his career low round to date.

Coletta then went onto card rounds of 69-73-70 and currently sits 82nd on the Korn Ferry Tour points list with a world ranking of 420th.

Colleta’s best world ranking career to date was 333rd after finishing 4th at the Pinnacle Bank Championship on the Korn Ferry Tour in 2017. His best result to date on the tour is a runner-up finish at the TPC Colorado Championship in 2019.

Tour journeyman Mark Hensby proved he still has what it takes finishing at 2-under-par for a share of 47th position along with fellow Aussie Brett Drewitt.

Curtis Luck damaged his chances finishing with a 75 to tie for 55th and the last of the Australians who made the weekend.

Ryan Ruffels missed the 3-under-par cut, along with Jamie Arnold.