England’s Hannah Burke fired a bogey-free final round of seven-under 64 to come from four shots behind and claim her first Ladies European Tour trophy at the Tipsport Golf Masters in the Czech Republic.

Rounds of 68-68-64 for a total of 200, 13-under par gave the 27-year-old from Welwyn Garden City a two stroke victory over overnight co-leader Nicole Broch Larsen of Denmark. 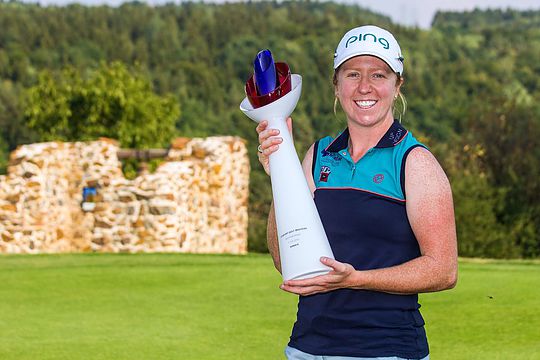 Fellow second round leader Becky Morgan from Wales dropped into a share of third position with rookie Swede Lina Boqvist on 10-under par.

Broch Larsen was two strokes clear after three birdies in her first seven holes but collapsed with a triple bogey seven on the par-four 16th from which she could not recover.

Waiting on the nearby terrace with some of the Pilsner sponsor’s product in front of her, Burke celebrated victory with a drenching in beer from her friends.

“I’m absolutely lost for words. I didn’t really focus too much on winning. I had a little goal set each day and went out to achieve them and I’ve come out on top, so it feels good,” said Burke.

“I missed my goal yesterday, because I double bogeyed the last, but it was to have no bogeys in 18 holes.”

“Today, I had seven birdies and no bogeys so I managed my goal. I played very consistent. I only missed one green and putted well. Seven birdies is a good way to get on top.”

A tearful Broch Larsen, 22, struggled to come to grips with her demise on the 16th, which included a trip to a fairway bunker and criss-crossing the green with chip shots en route to a triple bogey.

“I was going for making my par instead of just playing it out to the fairway and seeing if I could make four from there. Instead of five, I made seven and pars from there so it was just one hole.”

Scottish Open champion Rebecca Artis was Australia’s leading player once again, tied for 11th at eight-under par, ahead of Whitney Hillier (T18th) and Sarah Kemp (T40th). Artis remains in fourth position on the 2015 Order of Merit behind leader, Melissa Reid.