American Sam Burns nailed a 12 metre putt on the second playoff hole to successfully defend his title at the Valspar Championship, defeating fellow countryman Davis Riley on Sunday in Florida.

It was Burns’ third PGA Tour victory which certainly did not come easy for him. At the turn on Sunday Burns held a two shot lead before he bogeyed the par-3 17th — needing a lengthy putt to avoid a double. Playing in the group behind, Riley hit the closest shot of the day and converted the birdie to tie Burns at 17 under with a hole to play.

Riley then had a 3 metre birdie putt on the last for victory but his attempt to claim his first PGA Tour title slipped narrowly past the cup. On the first play-off hole the pair secured par to move to the second sudden death 16th hole where Burns drained his putt for the victory.

“Man, it’s crazy,” said Burns. “Davis played well today, especially the way he finished. I tried to stay steady. I didn’t make a lot of mistakes. A lot of time on Sunday if you plot your way around, make a bunch of pars, throw in a few birdies, a lot of times it works well. So happy.”

Burns is the second straight back-to-back winner at Innisbrook following Paul Casey’s consecutive wins in 2018 and 2019. The tournament was cancelled in 2020 due to the pandemic.

Justin Thomas and Matthew NeSmith finished one shot out of the playoff, with Thomas firing a closing round 70 and NeSmith a 71. Both players held a share of the lead at some stage during Sunday’s final round. 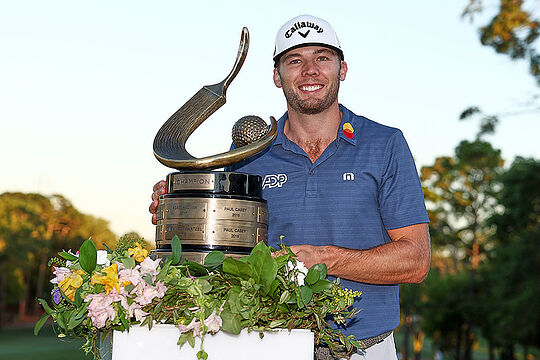 Burns, 25, earned US$1.4 million with the victory and joined Patrick Cantlay as the only players with three wins on tour since the 2021 Valspar Championship. Burns also moves to World No.10 with the victory and knocking Dustin Johnson to outside the top-10 for the first time in seven years.

As an amateur Burns represented the United States on the winning 2017 Arnold Palmer Cup team and he qualified for the PGA Tour’s 2017 Barbasol Championship, where he finished in a share of 6th place. He turned professional in 2017.

Burns won the 2021 Valspar Championship for his first PGA Tour victory firing a final round 68 to win by three strokes over Keegan Bradley. His second PGA Tour win came at the 2021 Sanderson Farms Championship in Jackson, Mississippi.

Jason Day missed the weekend, along with Mark Hensby and Cameron Percy and were the only Aussies competing at the tournament.

The PGA Tour now heads to Austin, Texas for the World Golf Championships-Dell Technologies Match Play while those not qualified for the $12,000,000 event will line up in Dominican Republic for the Corales Puntacana Championship.

Sam Burns will join the likes of Rory McIlroy and Cameron Smith as World Top 10 players not competing in Texas this week.