Burns holds on for win No.2 at Sanderson Farms

American Sam Burns carded a final round 5-under 67 to win the Sanderson Farms Championship on Sunday for his second PGA Tour victory this year.

Burns started the final day one shot behind overnight leader and PGA Tour rookie Sahith Theegala and stayed in contention with three birdies in his first seven holes.

On the back nine Burns hit the afterburner birdieing four holes in a five-hole stretch to add to his other PGA Tour victory earlier in the year at the Valspar Championship.

“This win is huge, it’s the first event of the new season for me and I enjoy coming to this place because it’s the closest event to home, so my family can drive over and I just love this area and the golf course,” said Burns.

“The main thing was that we knew what our game plan was. The nerves were there a little bit on 18, but I saw the leaderboard on the 17th green and I felt the guys behind us weren’t quite close enough to catch us.”

Burns moved from 25th to 18th in the world rankings following Sunday’s result. The 25-year-old also claimed a US$1.26 million prize from the $7 million purse and 500 FedExCup points, tying him with Max Homa for first place in the 2022 FedExCup race. 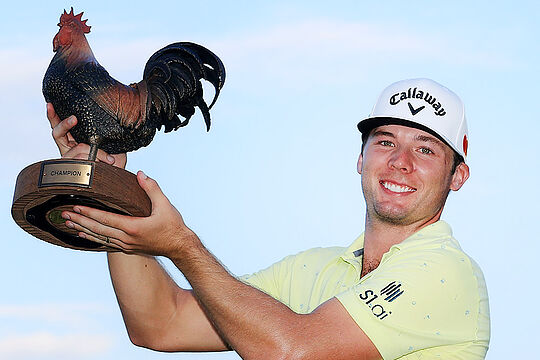 Sahith Theegala, who won the Australian Master of the Amateurs two years ago, opened with a 64 and followed with two 67s to hold at least a share of the lead through the first three rounds.

He took a one-shot lead into Sunday, but was not able to capitalise as a 1-under 71 landed him in a tie for 8th place at 19-under, three back of Burns.

“I think I know what I need to work on and what I need to do moving forward,” said Theegala. “I did so much good stuff this week and I’ll just try and build off the really good stuff and keep learning. A lot of it was mental today. It wasn’t even my game at all.”

Theegala is a three-time All-American at Pepperdine University, he won the Haskins Award, Ben Hogan Award and Jack Nicklaus Award in 2020. Sunday’s finish was Theegala’s third top-10 in his last four starts on both the PGA Tour and Korn Ferry Tour. He closed the Korn Ferry Tour Finals with a tied 4th and sixth-place finish to earn his playing rights on the main tour for this season.

Lucas Herbert, playing in his rookie year on the PGA Tour missed the weekend after rounds of 69-74. Cam Davis and Brett Drewitt also missed the 5-under-par cut mark.