American Sam Burns outlasted the in-form World No.1 Scottie Scheffler in a playoff to win the Charles Schwab Challenge in Fort Worth Texas nailing his birdie putt on the first playoff hole for his fourth PGA Tour win and third this year.

Burns began the final round seven shots adrift of the leaders and steadily made his way into contention with stellar iron play and a red hot putter in combination.

Burns birdied 1, 2 and 4. He bogeyed the 5th before adding further birdies on 6, 7 and 9 for a front-nine 30. Burns then played the back nine at even-par to sign for a five-under 65, which tied for the low round of the day as he awaited the top-end of the field to come in.

Scheffler having carded 66, 65, 68 across the opening three days, closed with a two-over 72 to set up a playoff with his American compatriot.

“When you start the day seven back, I knew Scottie was at 11 under,” said Burns. “I mean, the way that guy is playing right now, who would have ever thought that you’d have a chance seven back.”

“I just played such a good round of golf today and [caddie] Travis Perkins did a great job all day just keeping us in it. I’m proud of the way we finished, and then to make that putt is just icing on the cake.”

Burns, 25, played college golf at Louisiana State University, where he won four tournaments in 15 collegiate starts during his sophomore season. He was named a first-team All-American and was the NCAA Division I Jack Nicklaus National Player of the Year for the 2016–17 season. 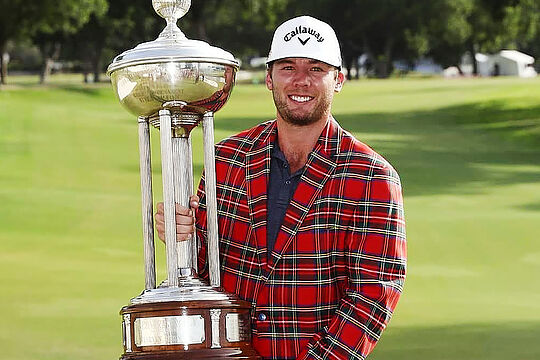 He turned professional in October 2017 and played his PGA Tour debut at the Sanderson Farms Championship, yet it was not until May 2021 that he won his maiden PGA Tour event at the Valspar Championship with a three stroke victory over Keegan Bradley.

Burns’ best result in a major is a tie for 20th at this year’s PGA Championship. Sunday’s result sees Burns taking home US$1,512,000 from a purse of US$8.4 million and moving up one spot to 9th in the world rankings, bumping Jordan Spieth to 10th.

Burns also earned 500 FedExCup points and moved to No. 2 in the FedExCup standings behind good friend, Scheffler.

Lucas Herbert shared 48th position to be the last of the Aussies making the weekend. Min Woo Lee missed the plus 1 cut mark by just a shot for the second week in a row.