Bush-loving South African Ockie Strydom posted a score of 69 to win the Alfred Dunhill Championship by two shots at 18-under with the 37-year-old claiming a maiden DP World Tour win in his 39th event.

Strydom’s win in his fifth event of the new 2022/23 season guarantees the Serengeti Golf & Wildlife Estate attached golfer a virtual three-year Tour exemption through to the end of 2025 following his victory on the course that overlooks the bush of Kruger National Park. 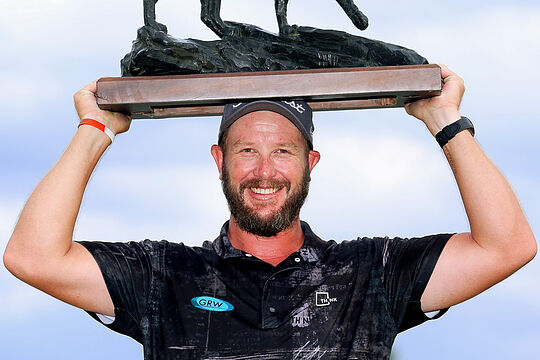 And in a rare first, Strydom won wearing shorts after Tour officials approved the temporary dress code change in the near 40 degree weather.

He said: “It’s nice. I think my plans just changed a little bit!”

“It’s my favourite place, this. All credit to Johann Rupert. The course is looking phenomenal – the best I’ve ever seen it.”

Strydonm’s only other pro victory was at the 2019 Vodacom Origins of Golf event on South Africa’s Sunshine Tour at Sishen, located to the south-west of Johannesburg.

Remarkably, he’s had some 20 other either second place or a share of second results from mid-May in 2011 to September this year.

LIV Golf’s Adrian Otaegui posted a closing 68 to finish runner-up to Strydom at 16-under.

The lone Australian in the field, amateur Harvey Young, finished well down the field following rounds of 88 and 71 around the Leopard Creek layout.

Young won the Victorian Junior Masters in 2021 and made headlines earlier this year after firing an opening round 66 to lead the US Junior Amateur in Oregon.