Spain’s Rafa Cabrera-Bello defeated fellow countryman Adri Arnaus in a play-off to end his four year wait for a European Tour victory when he took out the Acciona Open de España.

Cabrera-Bello shot a 2-under 69 in the final round to finish tied at 19 under par for the tournament with Arnaus, who closed with a 4-under 67 and fell just short of his first European Tour victory. Cabrera-Bello took the victory on the first play-off hole.

It was the fourth European Tour win for Cabrera-Bello, and his first since the 2017 Scottish Open. The 37-year-old Spaniard was second to Jon Rahm when this championship was last played in 2019. The tournament was not played last year due to the coronavirus pandemic.

“It was definitely one trophy that was on my bucket list,” said Bello. “To join my name to all those champions – Alvaro (Quiros) as well that I can think of – it’s very, very special. I’m very, very happy. I knew it was going to be a really hard battle today and I don’t think I need to say that I didn’t get off to the ideal start.”

“I’ve been believing in myself, I’ve had amazing support all this week rooting for me ever since the first minute and I was just hanging in there, I knew I’d have an opportunity and I’m glad that luck swung my way.”

World No.1 Rahm, who was a two-time defending champion at the Spanish Open, was not able to make a move in the final round and shot 69 which left him in a disappointing tie for 17th on 13 under par. 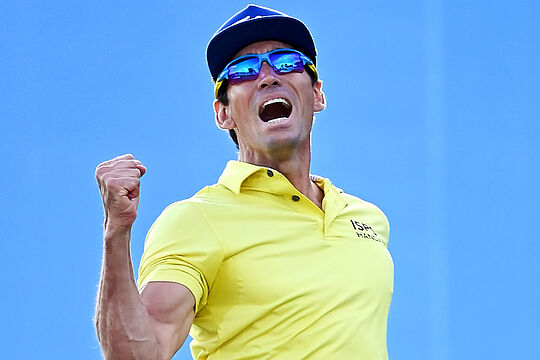 Rahm had returned to Spain for the first time in nearly two years and was trying to win his third straight Spanish Open title to tie Seve Ballesteros as a three-time winner.

Min Woo Lee finished the best of the Australians in a share of 39th position, with Jason Scrivener in equal 56th to round out the Aussies who made the weekend.

The European Tour remains in Spain for the next fortnight with the Estrella Damm NA Andalusia Masters commencing this Thursday and the Mallorca Golf Open the following week at the Golf Santa Ponsa Club on the Balearic Islands.