Northern Irishman Jonathan Caldwell has secured his maiden European Tour win after pulling off the ‘best shot of my career’ to win the Scandinavian Masters in Sweden.

The Belfast golfer landed a stunning 142-yard gap wedge shot from light rough right of the 18th, to near tap-in distance for a closing hole birdie in a final round 64 to win by a shot at 18-under par on the Vallda course outside of Gothenburg. 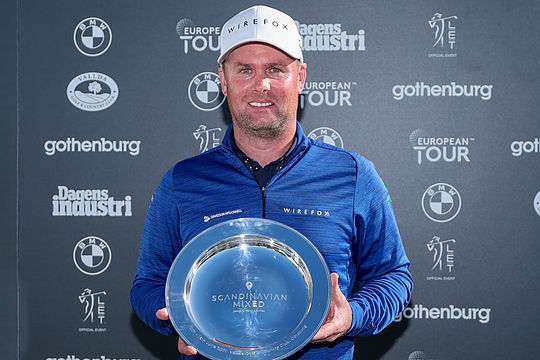 And while McIlroy has gone on to win four majors and 24 other pro career titles, Caldwell struggled so much with his game that at one point he found himself working at a Nevada Bob’s golf shop in Bangor.

“Lots of times I lost faith, but you can think like that, especially after a bad week on the EuroPro Tour – what am I doing sort of thing – but I certainly didn’t want to spend the rest of my days working in a golf store but I stuck with it and persevered and thankfully I did.”

It was an anxious wait for Caldwell as Spain’s Adrian Otaegui needed to complete his round and was tied with Caldwell with a hole to play. But after birdieing the 18th for two out of three days, Otaegui three-putted for a bogey to virtually hand Caldwell the title.

Caldwell was very emotional in singling out his parents for praise and moments after declaring: “The drinks are on me and put them on my tab” in a message to all his friends at his beloved Clandeboye Golf Club outside of Belfast.

After all the uncertainty in his career, Caldwell’s win now earns him a two-year European Tour exemption.

And top of the list is two of the biggest events on the Race to Dubai schedule – next month’s back-to-back Irish Open and the Aberdeen Standard Investments Scottish Open from July 8th to 11th at the Renaissance Club.

Caldwell said: “I’ve never contested a Scottish Open and now looking forward to it very much.”

“I know it’s on a links type course, and I like links golf, so I hope the wind blows a little bit and, if so, I could do okay.”

“On the back of the Irish Open, they are two of the biggest events on the European Tour and with The Open the week after, it’s a great chance also to maybe qualify for The Open.”

For the second week in a row, an Australian was in the mix coming into the final round of a European Tour event.

Last week it was Maverick Antcliff at the Porsche European Open with a share of the lead before a final day 75 saw him finish in 11th place. And this week it was Jason Scrivener, who held a share of the 54 hole lead alongside Caroline Hedwall, Alice Hewson and Rhys Enoch, with the Western Australian falling away into 7th place following a 73.

Scrivener’s final round missteps saw Scott Hend take the top Aussie spot in a share of 4th and just four shots off the pace.

The only other Australian to make the cut was Stephanie Kyriacou. The Sydney-sider and Ladies European Tour regular held 5th place following opening rounds of 68 and 66, however, rounds of 74 and 73 across the weekend dropped her into equal 25th and a shot ahead of event co-host and Open Championship winner, Henrik Stenson.

Let’s hope more of these tournaments are played on all majors tours – they make for great TV.