Callaway doubles down on Master Of The Amateurs

Callaway Golf has become the “Presented By” sponsor of the Australian Master of the Amateurs following a recent signing between the two companies in Melbourne.

Having already been involved with the R&A ranked tournament for over six years, Callaway’s General Manager of Callaway Golf South Pacific, Matt Meredith, was delighted to extend the corporate relationship even further. 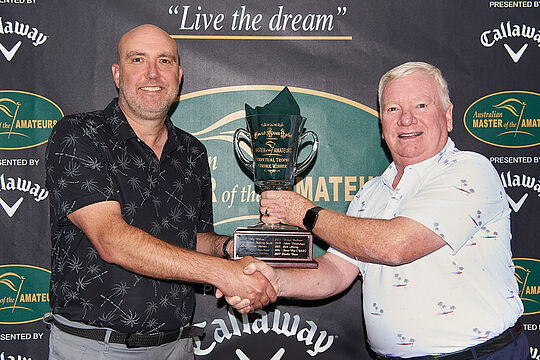 “We have been supporting the Master of the Amateurs now for over six years and it’s an event we truly love,” said Meredith.

“Callaway as a company has significant investment in junior, elite and tour golf, both men and women. The Master of the Amateurs is a great platform and we are happy to play our part in it. One of the best additions for us was adding the women’s event.”

“The tournament has been a great stepping stone for some amazing golfers, including many Callaway players. Having had the opportunity to play with Min Woo Lee a few years back was fantastic. Callaway players such as Marc Leishman, Kelly Kraft, Tom Lewis, Curtis Luck, to name a few have all played this event.”

This year’s tournament will mark the 25th anniversary of the tournament, with 2018 and 2019 arguably a turning point for the event when it partnered with Victoria Golf Club as the championship’s venue following a number of successful years at The Royal Melbourne Golf Club.

Also introduced for the first time, was the women’s championship, which quickly attracted the world’s best amateurs. Japan’s Yuka Yasuda taking the inaugural title in convincing fashion in 2018 and in the process setting a new course record with a 65 on The East course at The Royal Melbourne Golf Club.

Tournament directors and founders, Peter and Angela Mann have managed to bring the level of sponsorship for this event to a level unlike any other amateur event in this country.

“It’s a combination of having a strong professional team working towards making our tournament the best, attracting the world’s best amateurs, both male and female, who want to play our tournament,” said Peter Mann.

“Callaway have been super supportive and we are extremely proud to have Matt and his team on board presenting the tournament. It’s a powerful mixture of the right ingredients which attracts a family of great corporate sponsors. Without that we would not be the tournament which we are today.”

The fields for the Men’s and Women’s Championships in 2022 will be increased to 45 elite female golfers and 111 elite male amateur golfers. The field size will be capped at a total of 156 players with the tournament staged at The Victoria Golf Club from 11-14th January 2022.