Cameron Smith arrives on world stage at US Open

Apart from winning the title, it can hardly get any bigger than this for Cameron Smith.

Striding on to the world stage over these past days, the 21-year old qualifier from Brisbane finished with a spectacular eagle to deafening roars on the final green to grab a share of 3rd place in the U.S. Open. 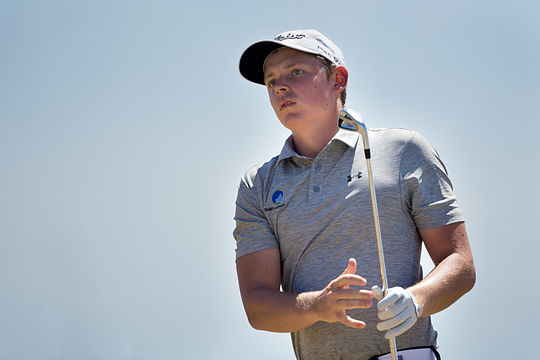 Cameron Smith at the 2015 US Open (Credit: USGA/Darren Carroll)

With this result, the doors of opportunity will now fly open in his young professional career.

A PGA Tour card was all but secured before the round started, however this result is expected to at least earn Smith starts at The Open Championship at St Andrews, the 2016 Masters and a return trip to the Open at Oakmont next year.

“Yeah, I can’t put it into words at the moment, to be honest. No, it still hasn’t really sunk in, and I don’t know what to say. Sorry.” he said.

“I thought I was coming in playing pretty solid. I thought I could definitely compete and if I could get my way around the golf course pretty good, I’d sort of thought I had a shot.”

Smith battled with major champion Louis Oosthuizen for the bulk of the day but was left in the South African’s wake as the former British Open champion burned up the back nine in 29, shooting 67 to set the clubhouse lead at four-under.

Smith responded with a birdie of his own before his penultimate shot in the championship, a three-wood, finished just a foot from the hole.

“I’m speechless. I just want to sort of sit in the hotel room and let it all absorb. It’s pretty cool coming up the last and everyone’s — I’ve never experienced anything near that before. That was awesome.”