Cameron Smith vows to stick with the mullet

Defending Sony Open champ, Cameron Smith has vowed to stick with the ‘Mullet’ and so the Queenslander was not surprised when asked about the haircut by fellow Aussie Ben Everill during his pre-tournament press conference in Hawaii.

“How did I know you were going to ask that?” said Smith in breaking out laughing. 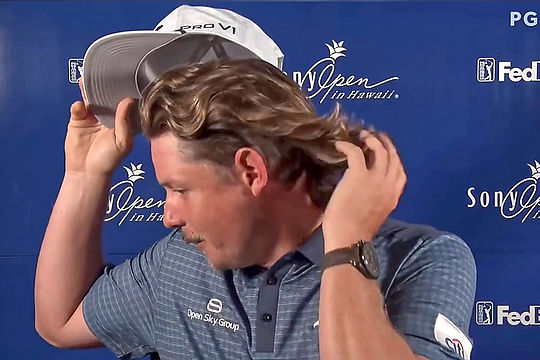 “It just came around, I saw a few of the rugby league boys at home doing it. It was a great time to do it during quarantine, just something fun. Make people have a laugh about it. I’ve just kind of kept it going.”

“I’ve almost turned it into my good luck charm. I think it needs a little bit of a trim at the front. I’d really like to go full business at the front and party at the back. But maybe within the next couple months, it might change up a little bit.”

Smith captured his first ‘individual’ title here in Hawaii 12 months ago, however, it was last November when the now 27-year old Smith really stamped his presence becoming the first player in the history of the Masters to shoot four rounds in the 60s at Augusta National.

Smith posted rounds of 67, 68, 69 and 69 to finish joint second and five shots behind American Dustin Johnson. It led to Smith also being asked what he felt he had learned about his game since November’s Masters.

“I think the biggest thing for me is just getting back to that longer stuff,” he said.

“I feel as though my short game and my putting is in a really good spot. I feel like I can make the putts when I need to make the putts. I just need to hit it closer, basically.”

And in speaking of the Masters, the current World No. 29 was asked his reaction to Augusta National Chairman, Fred Ridley announcing earlier Tuesday that there will be a limited number of patrons allowed to attend next April’s Masters.

“It’s encouraging for the future, absolutely,” he said.

“We miss the fans out here every week. I mean, I feel as though the atmosphere around there was obviously down this year. It’s such a unique place in that you can hear everything that’s going on throughout whole course. I think if we get a few out there, it will definitely make a difference.”