Campbell comes back from injury to claim NZ PGA

Ben Campbell is a relieved champion as he claims his first professional victory at the Horizon Golf NZ PGA Championship.

Returning to the Manawatu Golf Club, following a runner-up finish in 2017, Campbell made his presence known from the get go, holding a share of the lead after the first and third rounds. 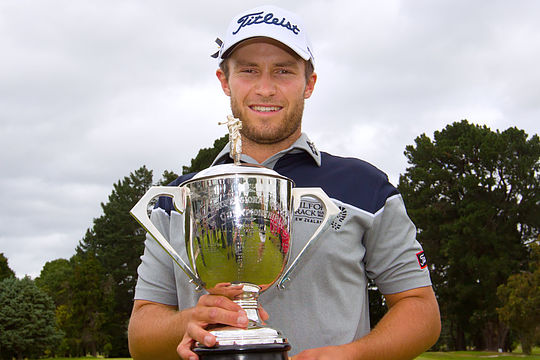 “It hasn’t really sunk in yet. I was close a couple of times last year and my game has been feeling really good lately so it’s nice to get the win, especially around here with family and friends around,” said Campbell.

“I changed my putting about two weeks ago and I was quite surprised how well it held up this week. I missed a short one on the front-9 today but I knew exactly what I had done and I took some time out to re-set and ultimately holed some good ones coming in.”

“There was a nice one on 15, it was weird, I was standing over the putt and I just knew that I was going to hole that one,” added Campbell who gained the outright lead on the 14th hole and never looked back.

Waking up this morning Campbell was greeted by windy conditions which he feels played to his favour and despite multiple players making a charge for the title he remained calm on course.

“I was actually really happy when I woke up this morning and saw how windy it was. I thought it would suit my game and I thought anyone would struggle to go really low out there. Although Simon Hawkes was 6-under after 9 holes,” added Campbell.

This is Campbell’s first victory as a professional but also closes a chapter on his career that was marred by mysterious injuries which limited his playing schedule in 2015 and 2016.

“It was a pretty tough time; I spent a lot of money and was told a few times that I would never play golf again,” added Campbell.

“I saw so many doctors trying to figure out what was wrong and I just kept not taking no for an answer. I stuck at it and saw light at the end of the tunnel.”

“I have worked really hard to get where I am. Through my injury I pretty much had to start at rock bottom again so it’s a pretty sweet feeling to get the win and get the monkey off my back.”

Campbell will head to the ISPS HANDA New Zealand Open next week, where he also finished runner-up in 2017, a champion on the ISPS HANDA PGA Tour of Australasia.

Deyen Lawson and Ash Hall finished runner-up shooting even par and 6-under 65 in the final round respectively.

Oates Vic Open Simon Hawkes almost won his second title of the year, he was 6-under after 9 holes and leading the tournament but went on to finish outright fourth on 15-under the card.

Antonio Murdaca and Matt Millar finished tied 5th on 14-under the card while a shot further back and rounding out the top-10 were Maverick Antcliff (QLD), Nick Voke (NZ), David Smail (NZ), Anthony Quayle (QLD).

For his win Campbell collected A$17,022.37 and is now 15th on the ISPS HANDA PGA Tour of Australasia Order of Merit.

The ISPS HANDA PGA Tour of Australasia will now travel south to Queenstown for the ISPS HANDA New Zealand Open to be played at Millbrook Resort and The Hills from 1-4 March.