Ben Campbell experienced the changeable Scottish weather in all its baffling glory but the Kiwi based Aussie managed to keep himself in the title hunt during the second round of the St Andrews Links Trophy.

After rounds of 69-71, Campbell once again is in contention to claim a main amateur title with his 3-under-par total a stroke behind second round leaders, Netherland’s Daan Huizing and Argentina’s Franco Romero. 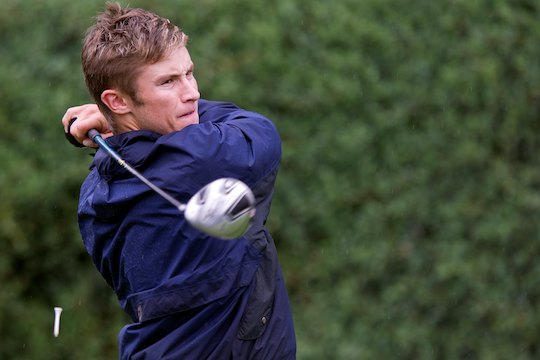 Campbell knows what it is like to be in contention to win an event.

This Australian summer the world number 14 recorded a runner-up finish in the Australian Amateur and either led or had a share of the lead during the final day in all his national trial events he played.

“I’ve been sick since arriving in the UK a fortnight ago and missed the cut last week, yet I’m feeling much better now,” said Campbell.

“I putting well and have scored well during difficult conditions this week. The pins yesterday on the New Course were placed in tough locations and today on the Old Course the wind blew.”

Remaining coy about his chances, Campbell knows with an international field of Europe’s best there’s little room for error and the closing stages of this tournament will be fiercely contested.

“You know most of the English and Scottish guys as they played this season back in Australia. You know what they are capable of doing and scoring. They are not only strong on the course but are mentally strong. Everyone believes they can win and it makes the event exciting because it’s so competitive.”

The championship will be determined following 36-holes on the Old Course on Sunday.

Englishman Andy Sullivan, the world number 10, had a day he will not forget in a hurry as he aced the 11th hole which kept him on course for back-to-back titles on Scottish soil.

The 24-year-old, who finished birdie-eagle-birdie at Blairgowrie last Sunday to secure the Scottish Open stroke play title, holed his eight-iron tee-shot on his way to a three-under 69 for a level-par 143.

The reining Australian Amateur champion, Matt Stieger, is also in the mix after rounds of 71-73 to be at 1-over-par and five strokes from the leaders.

With an international win to his credit in 2010 at the Pacific North West Amateur Stroke in the US, Australia’s top ranked amateur is eager to secure an early victory this tour.

Two other Australians made the plus-3 cut with Daniel Nisbet and Brett Drewitt making the weekend.

The Links Trophy is one of the few major amateur titles to be contested on the Old Course where the game has evolved for the last 600 years.

History and tradition spur on the competitors as they walk the haloed ground where the game’s greats have played and where many an Open Championships has been won and lost.

All are living the St Andrews dream and Campbell is loving every minute of it.