Can amateur success predict the future?

A player’s amateur pedigree can define their professional status and the one percent that actually make it on the PGA Tour.

Jack Nicklaus, Tiger Woods and now, following Sunday’s win at Winged Foot, Bryson DeChambeau. They are the only three golfers who have captured an NCAA individual title, a US Amateur and a US Open. 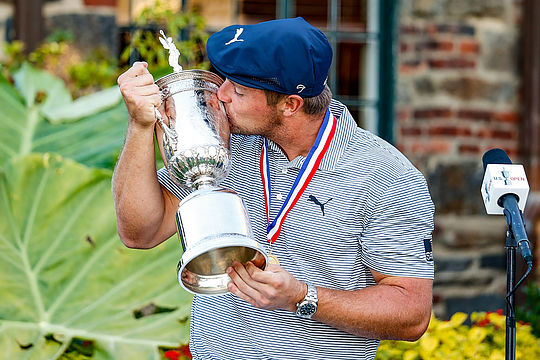 Bryson DeChambeau with the 2020 US Open (Credit: USGA)

DeChambeau carded a final-round, 3-under-par 67 to earn a decisive six-stroke victory over 54-hole leader and another former amateur standout Matthew Wolff, who was vying to become the first US Open rookie to win the title since 20-year-old amateur Francis Ouimet in 1913.

DeChambeau was the only player in the six US Opens contested at Winged Foot to post all four rounds at par or better, and was the only competitor to finish in red figures for the week with his 6-under total. Wolff posted a solo second and a sign of things to come from the former Oklahoma State player.

I’ve had the privilege to see both DeChambeau and Wolff in action as amateurs in Australia when they competed in our highest ranked amateur event, the Australian Master of the Amateurs, and at the US Amateur, which in 2015, DeChambeau won at Olympic Fields south of Chicago.

It was easy to see that both players were a cut above the rest. DeChambeau, the methodical perfectionist and Wolff with the winning attitude and death stare that could send shivers down any competitor’s spine.

Their individual amateur results spoke volumes of their predigious talents.

In 2015, DeChambeau was attending Southern Methodist University in Dallas, Texas. He became the first SMU to win the NCAA individual championship, before collecting the US Amateur, joining Jack Nicklaus (1961), Phil Mickelson (1990), Tiger Woods (1996), and Ryan Moore (2004) to win both events in the same year.

He ended the year finishing runner-up to Peter Senior at the Australian Masters before turning professional immediately after the Masters in 2016 and forfeiting his exemptions to the US Open and Open Championships.

Wolff finished runner-up at the 2017 US Junior Amateur Golf Championship. In his first year at Oklahoma State he earned four runners-up, first-team All-American honours, and the Phil Mickelson Award as the nation’s top freshman. He also made the putt to clinch the 2018 NCAA Division I Championship for Oklahoma State.

In his second season at College, Wolff started his season with back-to-back stroke play titles at the Carmel Cup and the OFCC Fighting Illini Invitational, which he followed up by sharing medallist honours at the Royal Oaks Intercollegiate before becoming the America’s top-ranked College golfer. He capped his college career off by winning the 2019 NCAA Division 1 individual championship and turning professional in June 2019.

So any aspiring amateur with views on the big time and not wanting to become a one-hit wonder should review DeChambeau’s and Wolff’s amateur careers.

Sure there are no certainties in sport, yet a player’s amateur pedigree in my view is a great litmus test as to their future professional success.