Can Koepka win a third US Open at Pebble Beach?

The US Open starts this Thursday at Pebble Beach with Brooks Koepka seeking a hat-trick after winning the championship for the last two years. A win on Sunday would be his fifth major in three years.

Koepka became the seventh player to repeat as US Open champion last year at Shinnecock Hills Golf Club and also won in 2017 at Erin Hills. 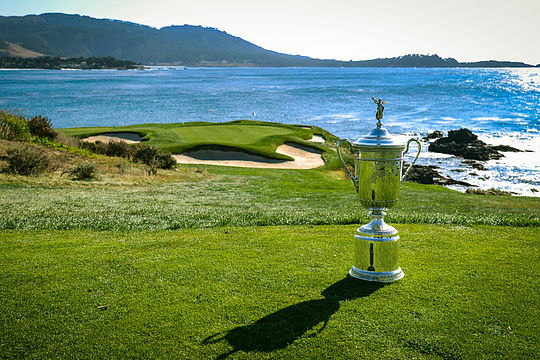 Curtis Strange was the last player to win consecutive US Opens in 1988 and 1989. Koepka can become the second player after Willie Anderson (1903, ’04, ’05) to capture three straight championships.

These championships have a history of defining true winners with only four of the last 16 winners of the tournament entering the week lower than 30th in golf’s world rankings.

The US Open is a brut of a tournament and one for the younger generation with with no golfer older than 32-yo lifting the trophy in the last ten years while a closer examination of past champions sees just seven players in their 20′s. The average age of the 156 man field is 30.92.

The lineup includes 78 fully exempt golfers, 12 of whom are past champions with 16 amateurs qualifying.

It’s the sixth time the US Open has been held at Pebble Beach with the last time in 2010 where Graeme McDowell carded a final-round, 3-over-par 74 to earn a one-stroke victory over Frenchman Gregory Havret at even-par ending a 40-year European drought in the US Open Championship.

In 2000, Tiger Woods dominated over the field with a 15-stroke win, which still stands as a record in any major championship.

Tiger’s return to glory with his Masters victory certainly sees him as a tournament favourite despite his missed cut at the PGA Championship.

There are 30 countries represented with the United States seeing 80 players in the field, while England has 13, South Africa has 9 and Australia has 8.

Pebble Beach Golf Links will be set up at 6469 metres and will play to a par of 35-36-71. The meterage for each round of the championship will vary due to course setup and conditions.

Aside from Koepka, Rory McIlroy, the 2011 US Open winner, Matt Kuchar and Xander Schauffele have each won twice on the PGA Tour this season and will be players to follow, particularly McIIroy, who is coming off a stellar win in Canada.

Yet McIIroy and Pebble Beach do not seem to mix with two missed cuts in two appearances, the 2010 US Open and 2018 AT&T. Providing he can be accurate with his driver on what traditionally is a super tight layout with penal rough, McIIroy could feature this week.

The last Australian to win the championship was Geoff Ogilvy in 2006 at Winged Foot with a one stroke win over Jim Furyk, Phil Mickelson and Colin Montgomerie.