Canadian Adam Svensson collected his maiden PGA Tour title closing with a 6-under 64 to win the RSM Classic on Sunday at Sea Island by two strokes over trio of England’s Callum Tarren and Americans Sahith Theegala and Brian Harman.

Svensson finished at 19-under-par after playing the tougher Seaside course in 20-under-par across the final three rounds following an ordinary 1-over-par opening round.

Sunday’s victory grants Svensson a two-year exemption on the PGA Tour, along with starts at the Masters and the PGA Championship.

Sharing the lead with Brian Harman and Callum Tarran, and Sahith Theegala making a late push, Svensson took the lead on the 16th hole with another long birdie putt, this time from 4 metres. The Canadian put the tournament away one hole later with a final birdie at the par-three 17th to nail the victory.

“It’s amazing,” said Svensson after the win. “To shoot one over (on Thursday) and then play the way I did Friday, Saturday, and Sunday, it’s the best golf I’ve ever played in my life.”

“I’m going to enjoy it for a couple days and then get back to work.”

Svensson had a stellar collegiate career at Barry University in Florida, where he won nine times in two years before leaving early to turn professional in 2014. He led the team to 2013 NCAA Div 2 victory, winning nine of his final 14 individual tournaments, and picking up the Jack Nicklaus and Phil Mickelson awards in the process. 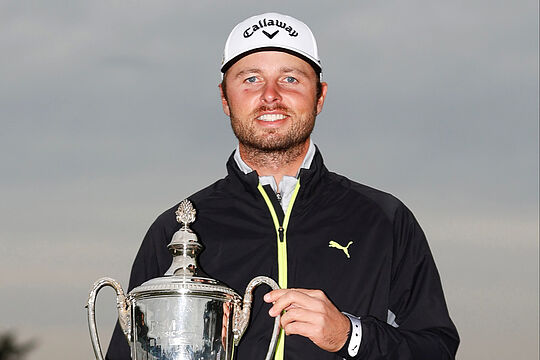 He spent three years on the-then Web.com Tour, where he broke through with a win in January of 2018 that basically clinched his promotion to the PGA Tour. That win came after Svensson barely missed graduating to the main tour during the 2017 Web.com Tour Finals.

“There’s times when I thought it wouldn’t happen, but overall I’ve always felt like I could win on the PGA Tour,” said Svensson.

On Sunday, Svensson won US$1,458,000, more than he won in either of his two previous seasons on the PGA Tour.

Aaron Baddeley finished the best of the Australians in a share of 39th position at 9-under-par. Jason Day, Brett Drewitt, Harrison Endycott missed the cut which came in at 4-under-par.

Aside from the usual silly-season events including the Hero World Challenge and QBE Shootout, the PGA Tour moves into a six-week break before officially resuming with the Sentry Tournament of Champions at Kapalua the first week of January.

By winning, Svensson was the last man to qualify for that field, the first elevated event that will have a US$15 million purse.