Corey Conners will take a three shot lead over Australian Cameron Davis into the final round of the Lake Macquarie International being played at Belmont Golf Club south of Newcastle.

Conners, runner-up at the 2014 US Amateur Championship, is at 13-under-par following rounds of 67-68-68, with Davis firing a third round 67 to move into outright second at 10-under-par, a stroke ahead of American Andrew McCain, Kiwi Jason Gulasekharam and Queenslander Simon Viitakangas. 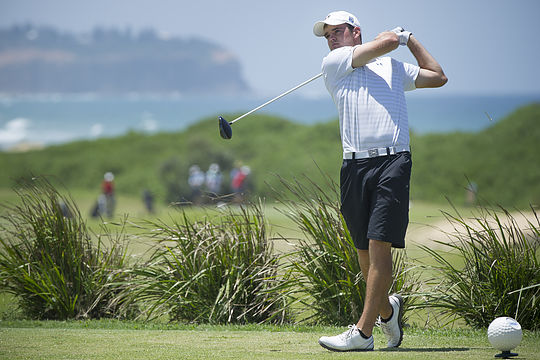 On a day where conditions favoured low scoring, a number of marque players made their move.

Lucas Herbert fired a 67 to move into a tie for 11th at 5-under, yet is eight behind Conners and will need another low round tomorrow to challenge.

Travis Smyth also fired at 67 to move up the leaderboard and is currently in a tie for 14th position. The day’s low round went to McCain with a 6-under, 66, which is three shots short of the course record set by Jason Day, Brett Drewitt and Vaughan McCall.

Conners will take some stopping and his three shot buffer leading into the final day is certainly a nice position to be in. Yet, the Canadian says he’s been doing nothing special.

“There’s low scoring out there. I’ll just play my game and focus on being consistent and keeping out of trouble tomorrow and see what happens. Obviously, it’s great to be in this position, but there is still more golf to play.”

Four players are within four shots of Conners and given the benign conditions expected tomorrow, those further back will have to produce something special to challenge the leaders.

Cameron Davis is certainly playing some stellar golf of late, including setting a course record last week on the West Course at The Royal Melbourne Golf Club with a 9-under-par 63 during the Australian Master of the Amateurs.

A third round 67 today from Davis shows he’s executing his shots well and with a recent win at the Victorian Amateur and a top-20 last week in Melbourne, Davis is poised to make a charge tomorrow. It will be interesting to see how Davis responds to the challenge of teeing off in the last group.

Lucas Herbert and Zach Murray, as well as Ryan Ruffles, will have to make a move. Murray is at 2-under and Ruffels at 1-over. Herbert is eight behind Conners.

New Zealand’s Luke Toomey, runner-up at this event last year to England’s Ryan Evans, is an outsider, with the Kiwi five behind Conners.

This is a tournament beckoning Conners to claim another international title.

With victories in Argentina and USA during 2014, the Canadian knows how to win and will certainly take some stopping tomorrow.