Canada’s Corey Conners has won the Lake Macquarie International with a 17-under-par total for a four shot victory over American Andrew McCain.

Conners took a three shot lead over Australian Cameron Davis into the final round and despite a momentary bogey hiccup on the opening hole, Conners powered through for his second major international victory in 12 months after winning the 2014 Jones Cup.

Closing out with a final round 68 after opening with rounds of 67-68-68, Conners never looked in doubt. McCain fired a final round 68 to finish at 13-under, with Ryan Chisnall and Cameron Davis a shot behind in a tie for 3rd position at 12-under.

Conners, runner-up at the 2014 US Amateur Championship, was ecstatic with his victory which sets the Canadian up well for this week’s Australian Amateur championship starting Tuesday at The Lakes and The Australian golf clubs in Sydney.

“It’s nice to get a win away from home,” said the 23-year-old Conners.

“I played well this week and the course really suited my style of play. I was able to hit plenty of drivers and I putted well.” 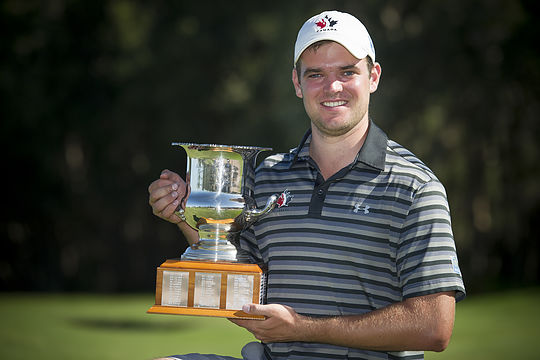 “Today, I sunk a few critical putts and that kind of stabilised my round for me early and I was just able to keep it going.”

The Lake Macquarie Amateur International marked the second of three in Conners’ stint Down Under.

He finished T12 a week earlier in the Australian Master of the Amateurs at Royal Melbourne, an ‘A’ ranked event on the World Amateur Golf Rankings (WAGR).

“I’m looking forward to the Australian Amateur and playing at what are both great courses. For the moment, I’m just enjoying this win.”

Travis Smyth shared the day’s low round with a 65 to jump up the leaderboard to finish in a tie for 5th position at 9-under, along with Jake McLeod, Harrison Endycott and Simon Viitakangas.

Lucas Herbert, the highest ranked world amateur competing at the tournament, finished with a 6-under-par total to finish in 13th position, two strokes ahead of last week’s winner at the Australian Master of the Amateurs, Zach Murray who closed in a tie for 19th at 4-under-par.

Ryan Ruffels finished at 2-under in a tie for 26th position.

The win also sees Conners rise inside the world’s top-20 on the R&A ranking.