Canadian Brooke Henderson overcame American Sophia Schubert to collect the last LPGA Tour major of the year winning the Evian Championship by a stroke in France.

Henderson secured the title after making birdie on three of her final five holes at Evian Resort Golf Club in a decisive victory, nailing a two metre putt on the 18th for the title. 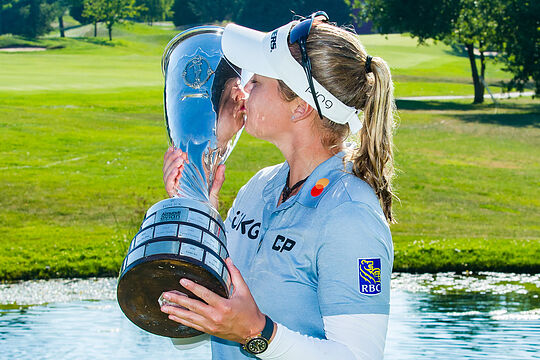 Henderson, 24, finished at 17-under to secure the second major championship of her career and pocket a record US$1 million pay day. Her first major came in 2016 at the Women’s PGA Championship at Sahalee Country Club and Sunday’s victory makes it her 12th win on the LPGA Tour.

“It was definitely an interesting day. Not the start that I wanted,” said Henderson. “I stayed pretty patient, as patient as I could under those circumstances. The saying is that ‘majors are won on the back nine on Sunday’ so I just tried to keep that frame of mind and knew that I was still in it if I could have a solid back nine. To be sitting here a two-time major championship is just an unreal feeling.”

Henderson’s US$1 million winners payout takes her career earnings to US$10,237,150, making her the 24th player in LPGA Tour history to pass the $10 million mark.

Stephanie Kyriacou and Hannah Green finished the top Australians in a share of 31st position at 7-under-par.