American Patrick Cantlay fired an eight-under par 64 on Sunday to claim his second US PGA Tour title at the Memorial by two strokes from Australia’s Adam Scott.

Cantlay, 27, went into the final round four strokes behind overnight leader Martin Kaymer whose bid to end a near five-year victory drought faded with a final round 72 that left him in third place.

Cantlay’s bogey-free effort was the best final round by a winner in the history of the Jack Nicklaus-hosted tournament at Muirfield Village in Dublin, Ohio.

“It just definitely validates my confidence that I can play with the best players in the world and beating a field like this on a big golf course like this, this is very similar to a major championship setup with the rough and the big slopey fast greens, it does a lot for my confidence,” said an elated Cantlay.

“Especially holing a putt like that on the last hole, knowing that I needed it. That’s good to put in the memory bank.” 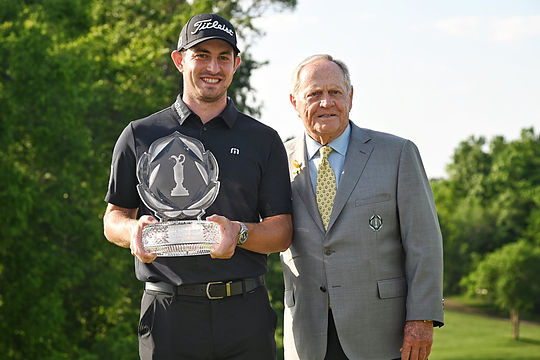 Cantlay’s previous tour title came in Las Vegas in November 2017, when he won the Shriners Hospitals for Children Open that was part of the 2017-18 season.

The US$1.64 million (A$2.36m) Memorial win capped an already superb PGA Tour season featuring a runner-up and a third placing among seven top-10s for a total of US$4,533,390 prizemoney so far.

Scott finished his week at the Memorial with a closing 68 and a 17-under total, which would have been good enough to win the last eight tournaments at Muirfield Village.

It was his second runner-up finish of the year after his second place at Torrey Pines, to go with top-10 finishes at Riviera and the PGA Championship.

Scott pulled to within two strokes of Cantlay with a birdie at the 16th hole but narrowly missed birdie attempts from 16 and 22 feet at Nos. 17 and 18, respectively, in his effort to force a playoff.

“I thought my short game was really good when I needed it this week,” said Scott. “I can’t just rely on hitting every fairway and green.”

“It’s a very different setup at Pebble than here, much smaller targets, and I’m going to try to rely on every part of my game to be good there, and I feel it is good.”

Jason Day and Cameron Smith both missed the weekend.

Tiger Woods struggled at times but did enough to finish inside the top 10 in 9th place despite two double bogeys and seven bogeys including two over his final five holes.

“Going into today I was never going to win the tournament, but I was hoping I could get something positive going into the Open, and I was able to accomplish that, which is great, and get some nice positive momentum going into a nice practice week,” said Woods.