American Patrick Cantlay fired a seven-under 65 to capture the ZOZO Championship by one stroke for his third PGA Tour title.

The former world number one ranked amateur began the final day three shots behind leader Justin Thomas yet produced the goods with a final round that included seven birdies to finish at 23-under-par and a shot ahead of Jon Rahm and Thomas.

The ZOZO was being played at Sherwood this year with the COVID-19 pandemic forcing PGA Tour officials to move the Japan-based tournament to the US due to travel restrictions.

Cantlay got off to a fast start with five birdies through his first nine holes but it wasn’t until he nailed an 8 metre putt for birdie at the14th that he moved into contention for the title. Until then, it was Jon Rahm and Justin Thomas trading birdies in a fight to the end for the championship.

Cantlay then moved to a three shot cushion before a hiccup on the 16th, yet neither Rahm or Thomas could make a move. Playing in the group ahead of Thomas and Rahm, Cantlay didn’t realise he had a three-shot lead and went after another birdie with a wedge to the par-5 16th, pulling it slightly into a tree and leading to his second bogey of the round.

“I didn’t know exactly where I was on the leaderboard. I thought I still had to make birdies, so I was firing right at that flagstick and I pulled it a little bit,” said Cantlay.

“It’s really great to win at home. I look forward to hopefully winning at Riviera, and anytime you win close to home it just feels a little sweeter.”

It has been more than a year since Cantlay’s last victory, when he rallied from three behind at Muirfield Village to win the Memorial Tournament. His other win was in Las Vegas in 2017 when he came from four shots back and won in a playoff. 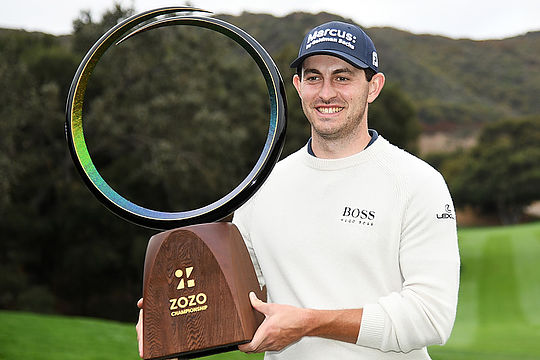 Sunday’s win is a solid and sweet victory for Cantlay, and one that sees him return to the top 10 in the World Rankings, at No. 9.

Cantlay said he plans to skip the next two tournaments, the Bermuda Championship and Houston Open, ahead of the Masters where last year he made a similar late Sunday charge up the leaderboard to record a tie for 9th, his second top-10 finish in a Major for that year after finishing in a tie for 3rd at the PGA Championship.

Brad Kennedy, a regular on the Japan Tour, finished in a share of 41st position at 11-under, Jason Day fired a closing 74 to drop 21 places to finish in a share of 60th position.

Marc Leishman finished at 2-under to share 70th position and the last of the Aussies.