Patrick Cantlay and Xander Schauffele have withstood a determined Sam Burns and Billy Horschel for a wire-to-wire two stroke victory in the Zurich Classic of New Orleans.

Cantlay and Schauffele closed with an even-par-72 in the alternate-shot final round to finish at 29-under to claim the tournament record of 27-under previously set by by Kevin Kisner-Scott Brown and Jonas Blixt-Cameron Smith in 2017. Together they became the first pair to win the event in wire-to-wire fashion since the event took on the team component in 2017.

Cantlay and Schauffele dominated from the start, shooting a best-ball 59 in the first round and never looked back to go onto card a 68 on Friday in alternate shot and then a 60 in best ball Saturday.

“It was a great week,” said Cantlay. “Second time we’ve played this event and we were looking forward to it since last year. We really always enjoy being with each other, both on and off the golf course, and we both played exceptional this week and had a great time doing it.”

Schauffele was also complementary towards his playing partner, whom he partnered with at the 2019 Presidents Cup at Royal Melbourne where they went 2-2, winning both times in foursomes in their maiden appearance. 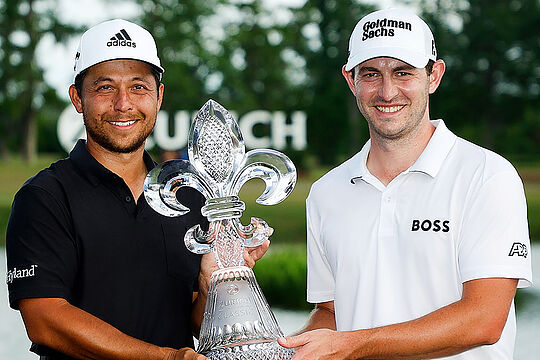 “I obviously found a really good partner,” said Schauffele. “He played unbelievable golf this week, made me feel comfortable. He brought the best out of me on the course. Yeah, there’s a lot to take from this week.”

Aussie duo Jason Day and Jason Scrivener put themselves into a great position across the first three days with rounds of 65, 65 and 63 before a Sunday 73 saw them fall into share of 10th on 22-under.

Defending champions Cameron Smith and Marc Leishman couldn’t replicate the magic from last year and closed in a share of 21st.