Cantlay carded a closing 67 to tie at 9-under with Cejka, who fired a 63 and Kim, who carded a 66, one shot clear of three others.

The win was the first in 43 starts on tour for the 25-year-old, a former world number 1 amateur who has had to overcome a serious back injury during his early days as a professional.

“It was a grind the last few holes,” said Cantlay said. “I had so many lows and all the hard work I did, it’s just so different from where I was that it’s hard to describe the feeling.” 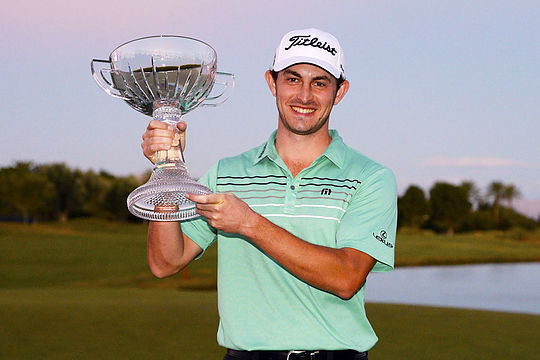 In 2013 Cantlay cracked the L5 vertebrae in his back and made just six starts from 2014 through 2016. Finally recovered, he was able earn his status back this season. Sunday’s victory now gives him two years exemption on the PGA Tour.

Cantlay and Kim each made bogeys at 18 in regulation to fall into a share of the lead with Cejka, who had been in the clubhouse for more than two hours after a final-round 63 with birdies on the last four holes. Yet Cantlay was able to withstand the pressure to secure the victory.

Touted a few years back as a potential ‘major’ winner, Cantlay has seen several players of a similar age, including Jordan Spieth and Justin Thomas, enjoy major championship success in recent years.

Following Sunday’s victory Cantlay is keen to make his name on the professional stage.

“I don’t feel like I’m behind the eight ball with those guys,” said Cantlay.

“It’s been great to see those guys play well because I know their games. I know who they are as people. I know how hard they work. I know what they do. I feel like I’ve always been right there with those guys, so looking forward to working hard and hopefully having some battles with them in the future.”

Cantlay moves to 3rd position in the FedExCup standings with his first career victory. It is his fifth top-15 finish in his last six starts on tour.