American Pat Cantlay secured a one stoke victory over fellow countryman Scott Stallings to take out the BMW Championship on Sunday.

Cantlay finished at 14-under-par for the tournament and in the process defending the title he won a year ago and moving to No.2 in the FedExCup standings. Cantlay became the first player to win the BMW Championship back-to-back since the FedExCup began in 2007.

“I’ve had a bunch of close Sundays this year and not all of them have gone my way, as opposed to last year at the end of the year where I felt like all of the Sundays went my way,” said Cantlay.

“I think it just drives you to practice a little harder. I’ve been playing great golf all year, so I knew that if I just kept knocking on the door and kept staying in a positive frame of mind and trusting myself that I’d knock off a few victories.”

Cantlay will go into the 30-man FedExCup finale as the No.2 seed, meaning he will start two shots behind Masters champion Scottie Scheffler on 10-under.

Sunday’s victory was Cantlay’s ninth PGA Tour win and his fifth in less than 14 months since he won the Memorial back in June 2021. Cantlay was the number one amateur in the world in 2012, holding the top spot for a record 55 weeks, before turning professional.

He earned his first professional win at the 2013 Colombia Championship, an event on the Web.com Tour. His first PGA Tour victory came in 2017 winning in a play-off over Alex Cejka and Meen-wee Kim at the Shriners Hospital for Children Open. 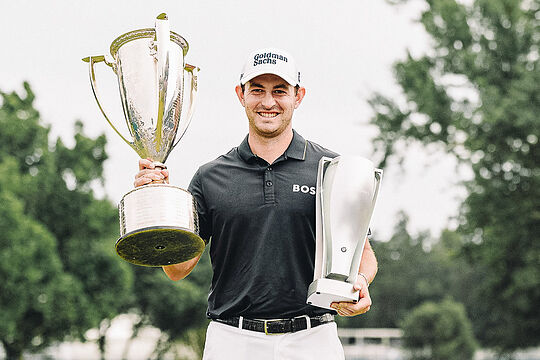 Adam Scott finished the best of the Australians to keep his final series alive with a share of 5th position. Scott was at 77th in the FedExCup when the post-season started and a tie for fifth at the FedEx St Jude Championship last fortnight moved him to 45th. The 2013 Masters Champion then pulled off a minor miracle again. Coming to the final hole on Sunday, Scott needed par or better to finish inside the top-30 for the season finale.

A par save from a greenside bunker saw him finish at No.29 and at the same time ending the hopes of Shane Lowry, who dropped to 31st and one short of his first trip to East Lake.

The field for this season’s Tour Championship has been set with the PGA Tour’s top-30 players set to battle from Thursday at Atlanta’s East Lake.

Two Aussies are in the field, Adam Scott and Cameron Smith, and by simply making the season-ender they are guaranteed a tidy AUD$727,250. In fact the money on offer this week is eye-watering, with a top prize of AUD$26.2 million and approx. AUD$109 million in bonus prizemoney.

Smith, who returns from an injury break, starts at 4-under and Scott is at even par.