He thrilled the golfing world last week winning a six-hole playoff with Bryson DeChambeau and this week, the man they call “Patty Ice”, lived up to his name in denying World No.1 Jon Rahm by a stroke to win the FedExCup and Tour Championship.

Following a nervous bogey at the 17th, Patrick Cantlay took a one shot lead to the 18th tee. Both players smoked their drivers with Cantlay recording his longest drive of the week at 330 metres, leaving him with just 199 metres to the flag and 13 metres ahead of Rahm.

The Spaniard knew he needed to eagle the par-5 hole and gave it everything he had, his ball narrowly missing the flagstick to finish on the fringe of the green 20 metres past the hole.

Cantlay could afford to take the safer option and left his 6-iron inside 11 metres of the hole to set up a two-putt, 21-under-par win after Rahm narrowly missed his eagle attempt to finish in outright second place.

“It felt like a huge win and it was. I played great today. It hasn’t even sunk in yet. I just kept telling myself to focus and lock in and I did a great job of that today,” said Cantlay.

“It was tough. It was the longest lead I’ve ever held. But I just tried to stay, day after day in the present, and I did an amazing job of that this week because the last couple days I made some mistakes I don’t usually make and I was able to really centre myself and hit a lot of good shots when I needed to.”

“It was like a one-on-one match play feel [with Rahm], and I think it will be great practice for The Ryder Cup.” 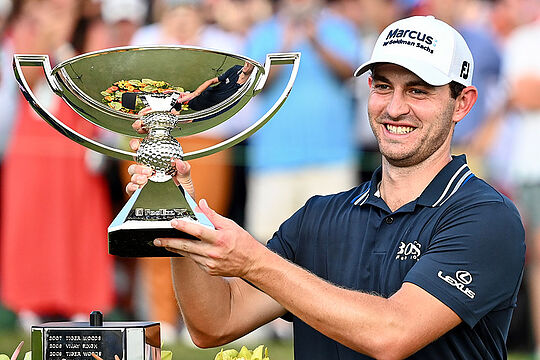 It’s been a long road back for Cantlay, who turned pro in 2012, just a year after shooting a 60 as an amateur at the Travelers Championship.

Things didn’t quite go the way he wanted though. A back injury robbed him of several years on Tour between 2013 and 2016 before his career took another turn for the worst following the death of his best friend in a freak accident in 2016.

Cantlay was again forced to regroup before returning to the PGA Tour in 2017.

“I think the biggest thing is it’s given me great perspective. I think for a long time, everything just went great. Growing up, I felt like I got better and better in golf and life got better and better, and then it got as bad as it could have been. I felt as low as it could have been for a little while,” said Cantlay of his time on the sidelines.

“Coming out on the other side of that, I feel like I am a better person having gone through those dark days. But it gives me great perspective and it makes me very grateful to be in the position I’m in today, because it wasn’t always a sure thing.”

“I was very close to going back to school and putting golf behind me.”

The 29-year-old takes home $15 million for his win adding to the $7.6 million in prize money he had already earned this season and there’s no denying he deserves every cent after producing some of the most exciting golf in years on the PGA Tour.

Today’s win takes his PGA Tour total to four for the 2020/21 season along with a runner-up at the American Express in January and a 3rd place at the AT&T Pebble Beach Pro-Am a week later.

Rahm’s second placing earns him $5 million while a final round 3-under 67 from Kevin Na sees the 37-year-old with a $4 million payday.

Justin Thomas birdied his final hole to secure outright 4th place on 15-under for $3 million.

The only Aussie in the field, Cameron Smith, finished up in a share of 14th place alongside Rory McIlroy, Sergio Garcia and Louis Oosthuizen on 7-under for $583,750. Smith’s third round 73 proving very costly in the final wash up.

The PGA Tour now takes a week off before the 2021/22 season kicks off at the Fortinet Championship in Napa, California from September 16.

There’s no rest for the top players either with Team USA and Europe heading into Ryder Cup camp. The biennial contest will tee off at Whistling Straits from September 24.