This year, the Jack Nicklaus-hosted Memorial had arguably one of the unusual finishes tournament organisers could have hoped for when 54-hole leader John Rahm returned a positive COVID-19 result and was forced into a mandatory 10-day lockdown period shortly after he walked off the 18th green on Saturday.

Rahm’s record-setting ways through three rounds at Muirfield Village Golf Club where he tied the tournament’s 54-hole record set by Tiger Woods in 2000, would have given him a socially distanced six-shot lead heading into the final 18.

Instead, he was unceremoniously forced out of the tournament, leaving Patrick Cantlay and Collin Morikawa to battle it out on Sunday.

The pair, who each shot 1-under 71 on Sunday, made late birdies to pull away from the field and then each parred the 18th hole to force a playoff.

On their second trip up the 18th hole that day, Cantlay buried a four metre putt for par to become the Memorial champion for a second time after winning the title in 2019 and a four-time winner on the PGA Tour. Morikawa’s par bid from 2 metres missed.

What’s In The Bag: Patrick Cantlay

“Such a weird situation and very unfortunate,” said Cantlay. “(Rahm) played so amazing the first three rounds that the way I felt Sunday morning was obviously a lot different than I felt walking off the 18th green on Saturday.”

“Unfortunately, there’s nothing I can do except reset and just take the new paradigm and run with it. I thought I did a good job of staying focused and it really felt like a battle between Collin and I all day and that’s just kind of how it played out. It just felt like it was me and him trading blows all day.”

Cantlay came into the tournament on the back of four missed cuts in six starts and had not posted a top-10 finish since the AT&T Pebble Beach Pro-Am in February. 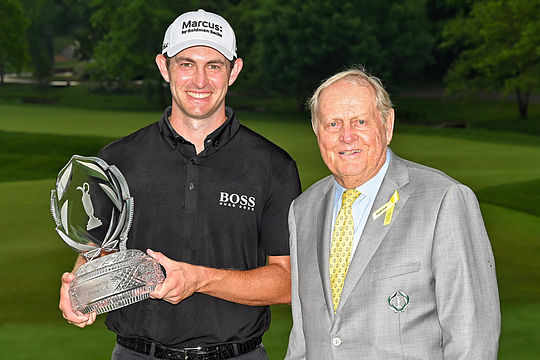 The new World No.7 also won the ZOZO Championship in California last October, rallying from a three-shot deficit to beat Rahm and Justin Thomas. He becomes the seventh player to win multiple times at the Memorial, with Tiger Woods winning five times and even tournament founder and host Nicklaus winning twice.

Adam Scott finished the best of the Australians in a share of 16th at 2-under-par with Lucas Herbert also securing at top-20 finish sharing 18th position. Marc Leishman shared 57th position to be the last of the Aussies to make the weekend.