Race car fan Marcus Fraser is clearly excited by competing next door to the famed Monza F1 circuit producing his lowest European Tour career score of a nine-under par 62 to seize a share of the lead on day two of the Italian Open.

The 39-year old is a big fan of Australia’s V-8 Supercar Series but he also enjoys visiting the F1 Italian GP race circuit that backs onto the Milano Golf Club course. 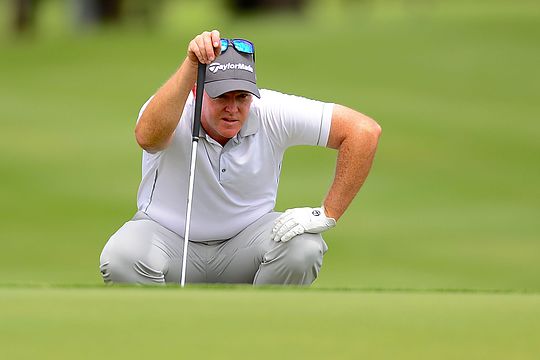 With the sounds of cars testing at the circuit, Fraser picked off nine birdies, including five in a row from the eighth, in a second straight bogey-free display to be tied at the top with England’s Matt Wallace with the similar aged Brit, who had shared the lead with five others on day one, managing an eagle and four birdies in his bogey-free 65.

The duo enjoy a two shot lead over Thailand’s affable Kiradech Aphibarnrat and Welshman Jamie Donaldson who posted 67s to be tied third at 11-under.

Overwhelming crowd favourite, Francesco Molinari, had his golfing ‘Tifosi’ cheering wildly as was evident when Molinari chipped-in for birdie from off the green at 13.

Fraser arrived in Monza well down the grid lying 136th on the Race to Dubai and 259th on the World Rankings.

But a red-hot putter and some good bounces, including one shot that looked headed out-of-bounds, has Fraser sharing the weekend pole position for a fourth Tour victory.

“It’s nice when it felt like it was progressing but haven’t felt that comfortable for a long time with my game. Felt like I putted well and scrambled well this week.”

“Today I took it to a new level with the putter and felt like I putted well yesterday and probably out-did it today.”

Sadly, Fraser has made just six cuts in 19 events this year and with a best finish being T5 back in May at the Rocco Forte Open in Sicily.

In a frank admission, Fraser revealed he was close to ‘chucking it in’ with his demeanour not helped a week ago when he was disqualified following a second round 76 at Kingsbarns Links – one of three host venues for the Alfred Dunhill Links Championship.

“I’ve been very close to chucking it in and going home and having a nice long break and trying to find out where my golf is,” he said.

“When you have rounds like that today, it’s a bit of reassurance that you are capable of still doing it.”

Fraser now will be looking to become only the third Australian to win the Italian Open and, if successful, would join the two all-time greats of Australian golf with Peter Thomson winning in 1959 and Greg Norman in 1988.

Brett Rumford ended his round in spectacular style eagling the last in a round of 65 for a share of 27th place at six-under. It proved timely for Rumford who arrived in Italy having missed the cut in his last three events.

Wade Ormsby, and an even bigger car racing fan than Fraser, ensued his place on the Monza weekend grid with a pair of 69s to be tied on four-under par with Sam Brazel (67 & 71).

But missing from the weekend is Nathan Holman, the very first to tee off on day two, but rueing a second double bogey in two days in scores of 70 and 69 to miss the cut by one on three-under.

Andrew Dodt was also cut from the event with rounds of 71 and 74 for a three-over tally.