Angel Cabrera won the Greenbrier Classic on Sunday for his first non-major victory on the PGA Tour, closing with a second consecutive six-under-par 64 for a two-stroke victory over American George McNeill.

The 44-year-old Cabrera, whose only other PGA Tour victories came at the 2007 US Open and 2009 Masters, entered the final round just two shots from third round leader Billy Hurley. Cabrera’s final round included an eagle on the 13th, six birdies and two bogeys. 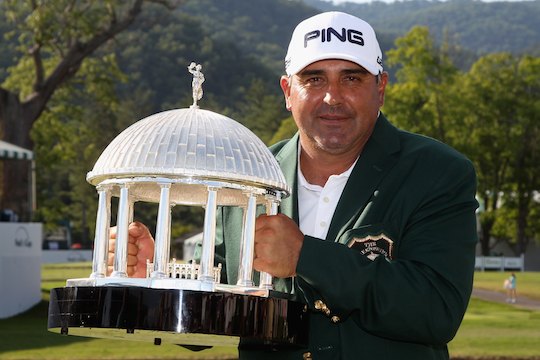 Cabrera had no top 10-finishes this season on the PGA Tour but came out guns blazing on Sunday, hammering drives and approach shots with precision and coming up with clutch putts, especially on the back nine.

“This was a great opportunity,” Cabrera said through an interpreter. “I wanted it. I needed to win a tournament. I felt under control today out there, and I didn’t want to let it get away from me.”

Cabrera won $1.17 million and moved from 158th to 54th in the FedEx Cup standings. It was his 39th international victory since turning professional in 1997.

He has three wins on the European Tour with his most recent being the 2005 BMW Championship. Cabrera also came agonisingly close to victory at last year’s Masters, missing out in a sudden-death playoff to Australia’s Adam Scott.

Cabrera now heads to Royal Liverpool for The Open with momentum on his side. His best finish at The Open is a tied 4th in 1999, yet has not made a cut this year in the majors.

Webb Simpson finished in 3rd position to earn a position at The Open, along with Keegan Bradley and Brendon Todd, who finished in a tie for 4th with Bud Cauley.

Robert Allenby was the best of the Australians, finishing in 27th position, with

Goss is playing on limited sponsor’s invites on the PGA Tour since turning professional following last month’s US Open and is attempting to gain playing rights but will need to bag a string of top-5′s if he is to have any chance of playing the main tour next year.

With The Open Championship starting 17 July, eight Australians have earned their position in the field.

With this week’s John Deere Classic and the Scottish Open the last opportunity for qualification much attention will focus upon who will gain the last remaining starts at Royal Liverpool.