It took Paul Casey nine years to capture his second PGA Tour title and now he has won a third trophy just 12 months on.

The Englishman became the first player to successfully defend the Valspar Championship at the Innisbrook Resort and takes home $1.2 million for a total of $3 million this season alone.

The 41-year-old went head-to-head with World No. 1 Dustin Johnson over the final round posting a final day 1-over 72 to win by a stroke with an eight-under par tally.

Johnson was never a threat, uncharacteristically failing to post a birdie in a 3-over 74 to end the tournament in a share of sixth place at 5-under.

It was fellow American Jason Kokak (71) along with former Open Champion Louis Oosthuizen (69), who shared second place at 7-under. 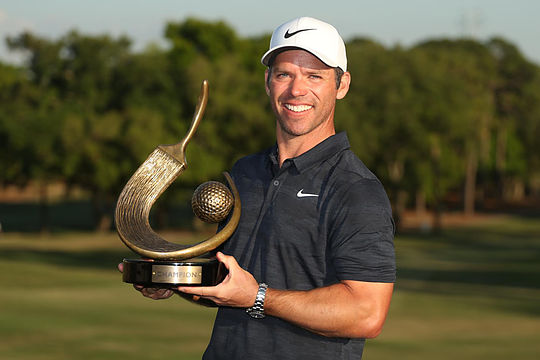 Now a year later and Casey has captured a third Tour win to become the first repeat champion in the 20-year history of the event as well as celebrating a 20th worldwide success.

Casey’s win will go some way towards making amends for his loss to Phil Mickelson last month at the rain-affected AT&T Pebble Beach Pro-Am.

“It was a messy last round but this golf course is just so difficult as I did make some errors including two three-putts where the biggest things.”

“In my mind too, I was going up against the World No. 1 and I felt if I beat him I will probably win this (holding up the trophy) but it turned-out to be a very different scenario as Dustin struggled today.”

While Casey is now heading to Texas for this week’s WGC – Dell Technologies Match-Play, his focus is clearly on the Masters in just a few weeks’ time.

“This win is mega for me heading to Augusta,” he said.

“I feel good and I know I have got to play like that in going to the Masters. I drove the ball so well this week.”

Matt Jones and Curtis Luck were the only Australians to make the cut with both players finishing in tie for 13th at 3-under.

John Senden, Jason Day, Rod Pampling and Cameron Davis all had the weekend off.