20-year-old Castle, a University of Kentucky junior, had opened the championship week with a 7-over-par 79 in Monday’s first round of stroke play and then survived a 12-for-2 playoff just to reach match play to became the first No. 63 seed to win the championship. 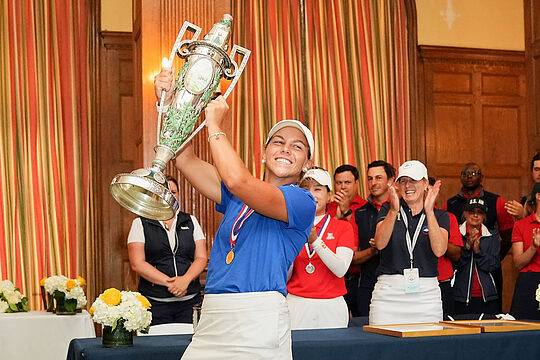 Sunday’s victory was built on sheer determination with Castle rallying from 2 down with three to play in Saturday’s semi-finals to oust world No. 2 and reigning NCAA champion Rachel Heck in 19 holes.

“It still hasn’t registered,” said Castle. “It feels like just another tournament, but then I step back and I’m like, this is a USGA event with so much history, and I just can’t imagine… all the exemptions I didn’t even realise [I had coming]. “

For Hou, a former No. 1 player in the Women’s WAGR who came into the week at No. 21, it was a disappointing defeat, especially when she took a 2-up lead after the first 18 holes.

But the 20-year-old University of Arizona junior from Chinese Taipei was unable to match Castle, who came out of the box quickly in the afternoon round, winning three of the first four holes with birdies, and adding a fourth win with a par on the 26th hole to take a 2-up lead through 27.

Castle, No. 248 in the latest WAGR, extended the lead to three holes with a winning par on the 29th hole.

With the win Castle receives exemptions into the next ten US Women’s Amateurs, a start at the 2022 US Women’s Open at Pine Needles Lodge & Golf Resort in Southern Pines, and the 2021 AIG Women’s British Open at Carnoustie in two weeks, and the 2022 ANA Inspiration and Amundi Evian Championship (must be an amateur) as well as invitation to the 2022 Augusta National Women’s Amateur.

Brisbane’s Emily Mahar finished the best of the Australians after reaching the quarter-finals before going down to eventual winner, Castle, 6&5.

The in-form Grace Kim, could only make it as far as the round of 32, with Rachel Heck crushing the Aussie 7&6.

Earlier in the round of 64, Maddison Hinson-Tolchard went down to Emily Mahar, 2-up.