American John Catlin carded the highest winning score on the European Tour since 1992 when he won the Andalucia Masters at Valderrama on Sunday with a two-over-par finishing total to pip former world number one and two time major winner Martin Kaymer by a shot.

The 1995 Ryder Cup venue has long been established as one of the toughest tracks in the world. A move from its usual autumn spot on the calendar made life even more difficult, as strong winds combined with quick conditions saw some extraordinary totals down the lower end of the leaderboard. 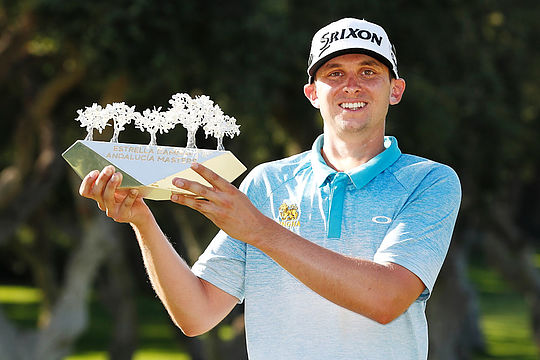 Catlin’s two over par is the highest winning score on the European Tour since Sandy Lyle’s 1992 Volvo Masters win, which was also played at Valderrama.

“This is a very difficult golf course, the greens were firm and fast and the wind was no easier than it had been the previous three days,” said Catlin, a former University of New Mexico student.

No player finished the week under par, the cut fell at eight over, the highest this season by five shots and there were only 20 scores under 70 all week.

Catlin had started the day two shots clear at the top but bogeys at the fifth, tenth, twelfth and fourteenth meant Kaymer, who birdied at the second, fourth and twelfth pulled level to set up a dramatic finale to the tournament.

Kaymer missed a prime opportunity to take the lead at the 17th, missing a six foot birdie putt, and Catlin kept his composure with a nice lag putt at the final hole to inside a metre. Kaymer had to hole his chip from the edge of the green to keep his chances alive and he almost did just that, but his bogey meant Catlin’s tap-in par sealed a victory and Kaymer finished runner-up for the second week in a row.

The win was Catlin’s first European Tour title to add to his four victories on the Asian Tour. It earned the 26 year old a €196,690 first-place check for his wire-to-wire win.

“One of my goals when I earned my card was to win on the European Tour, and I wasn’t able to win in 2019 so it’s very nice to get it done this week and especially on a beautiful golf course, and very demanding one.”

Wade Ormsby was the best of the Australians finishing in a share of 31st position at 11-over-par. Jake McLeod finished at 15-over-par for a share of 57th position. Jason Scrivener missed the cut along with Maverick Antcliff and Zach Murray.

Of the 22 events played so far this season on the European Tour, eight players including Catlin have been first time winners, including Aussies Lucas Herbert who in his 50th appearance won the Omega Dubai Desert Classic with a memorable play-off victory over Christiaan Bezuidenhout and Min Woo Lee held his nerve in difficult conditions to win his first European Tour title at the Victorian Open, in what was his 19th start on Tour.