John Catlin waited 33 European Tour events to capture his maiden victory title and now like the proverbial No. 272 bus, the American has won a second title just weeks after his Valderrama success.

Catlin, 29, birdied three of his closing four holes in a round of 6-under 64 for 10-under par and a win by two shots under four days of a ‘preferred lie’ ruling. 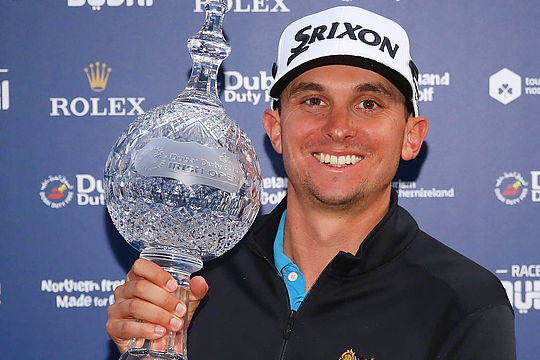 Catlin also became only the third American to capture the Irish Open and the first since 1977 when Hubert Green held off compatriot Ben Crenshaw, who had won the event a year earlier.

“It’s pretty odd. So many years of hard work have gone into this moment. It was my goal to win again at the start of this week, to have accomplished it is something truly, truly special,” said Catlin.

“I had nothing to lose. I was going after every flag, I had good numbers and the greens were soft. So I started taking aim and hit a couple in their close. I made a long one on 15 and that three wood on 18 was so satisfying.”

“It was 268 yards to the hole, cold and damp. To just hit a big high draw in there like I know I can, under those conditions, is really is hard to put into words.”

“Winning at Valderrama was massive. You never know if you’re going to win or not, to get that monkey off my back at Valderrama really freed me up today to know I could do it. To be able to look myself in the mirror and tell myself that I’ve been here before and I can do it again.”

“I’ve always wanted to play in the Majors, that’s the only level of golf I haven’t played at. Hopefully one day I can win one of those as well. To have gotten inside that top 100 is a big leap forward.”

England’s Aaron Rai, who led for three rounds, failed to birdie the last to force a play-off and instead posted a bogey in a round of 70 to be runner-up at eight under par.

Thailand’s 24-year Jazz Janewattananond, a six-time winner on the Asian Tour, let slip victory in taking a double-bogey at the par-3 14th and dropping from one in front to then one behind.

‘Jazz’ eventually posted a 69 to finish third at 7-under alongside Australian Maverick Antcliff (70).

Fellow Aussie Lucas Herbert also secured a top-10 finish thanks to a pair of 67’s on Friday and Saturday. The Victorian shared equal 7th on 5-under.

Overnight frost and morning fog led to a three-and-a-half-hour delay to the start of play.