Handshakes and hugs might not be the only things getting banned if European and PGA Tour winner Alex Cejka continues to keep winning mini-tour events.

Next time European and PGA Tour winner Alex Cejka turns up at a mini-tour event, he may not be welcome. 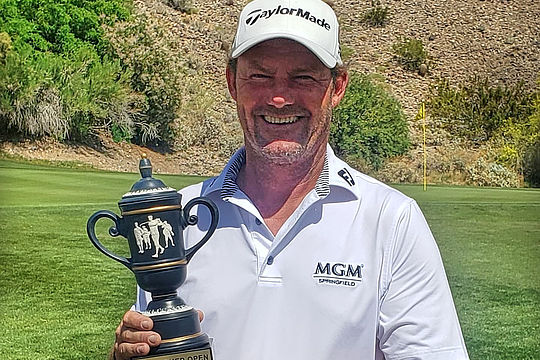 On Sunday he claimed his second consecutive mini-tour trophy at the Parker Open in Arizona but this time he really had to work for the trophy.

As the four-time European Tour winner stood on the 13th tee, he was six shots behind leader Eddie Olsen and would need something spectacular to get the W…and Cejka did just that.

The German began with a birdie at the 13th, then stepped it up with a hole-in-one at the 14th followed by another birdie and then an eagle at the 16th for good measure. His 6-under across those four holes for a round of 68 was good enough to get him into a playoff with Olsen.

While the entire purse for the tournament was just US$42,000 with the winner taking home US$7,000, Cejka made a week of it by bringing along some family and used the tournament to keep his game in check while waiting for the PGA Tour to return.

The 49-year-old has amassed a total of €4.2 million in Europe and close to $13 million on the PGA Tour and will be eligible to play the Champions Tour when he turns 50 in December.