Australian David McKenzie has secured a top-10 finish on the PGA Champions Tour, with a share of 6th at the Regions Tradition Championship, the first Seniors Tour major of the year, finishing nine strokes behind eventual winner Germany’s Alex Cejka.

It was David McKenzie’s best result from his 17 starts on the Champions Tour and sees him move to 44th on the season’s money list with US$341,017. 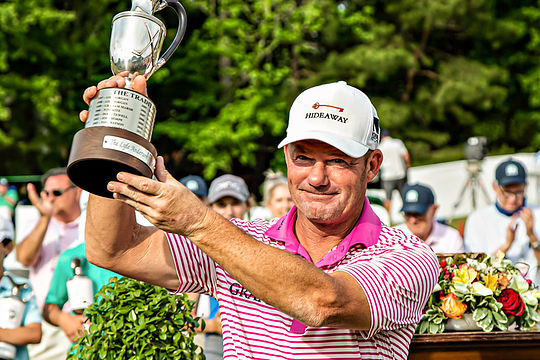 Sunday’s victory was Cejka’s first on the Champions Tour and he pulled it off in style securing the title with a 2-metre birdie putt on the first extra playoff hole to deny defending champion American Steve Stricker back-to-back trophies.

Cejka, who was making only his third senior start, entered the final round trailing by one, then shot a five-under 67 to Stricker’s 68 to get to the playoff. Both players completed 72 holes in 18-under par.

The win not only gives Cejka a nice payday with US$375,000, but also a five-year exemption on the tour. It was his first win on a major tour since claiming the Puerto Rico Open in a playoff in 2015, the only PGA Tour victory of his career.

Because of his status as a winner on the PGA Tour and the European Tour, Cejka was eager to try PGA Tour Champions after getting the lowdown from his friend Bernhard Langer, one of his golfing idols. Langer current tops the season money list on the tour with one victory from 20 starts and US$1.8 million in prize money

Rod Pampling also recorded a top-20 finish in a share of 14th, with Stephen Leaney sitting in equal 19th. Rookie John Senden secured 29th to round out the Australians competing in what is referred to as the first major of the Champions Tour although it is not recognised as such by the European Tour.