Cejka shot a 3-under 67 for a four-stroke victory over Tim Petrovic, three weeks after he beat Steve Stricker in a playoff in the Regions Tradition in Alabama. 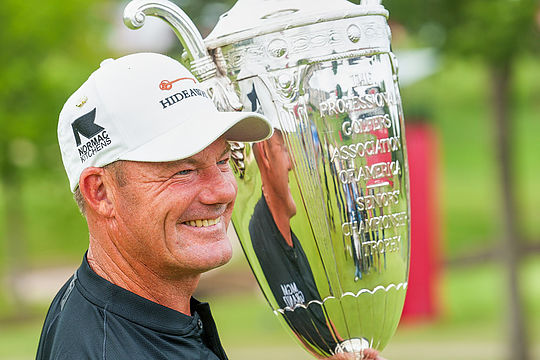 “I’m the same guy, I’m trying to play the same golf. I just seem to get luckier breaks, make more putts, drive it better since I turned 50,” said Cejka. “It’s a blast. The last couple of weeks have been incredible. I can’t even describe it in words how that feels.”

Cejka joined the PGA Tour Champions without enough career money winnings for full status, and was an alternate into the Regions Tradition which he won. He also finished second in the Chubb Championship in April. He has now not only has earned full status but has also made his way into the 2022 PGA Championship.

In the five events Cejka has played on the PGA Tour Champions he’s made the cut in all and pocketed over US$1 million from two wins, a runner-up and two top-40 finishes.

Stephen Leaney finished the best of the Australians in a share of 11th position at 1-over, nine shots behind the leader. Rod Pampling finished in a share of 40th, with Peter Fowler in a share of 63rd position.