It may have taken 385 previous career starts but Greg Chalmers secured his maiden PGA Tour triumph at the Barracuda Championship closing in style with an eagle for a six-point victory at the Montreux Golf layout in Reno, Nevada.

Chalmers carded a 43-point total to emerge victorious over American Gary Woodland at an event that uses the modified Stableford scoring system.

“It’s hard to win and I’m very thrilled and very pleased to get it done,” Chalmers said. “It was tough. I knew today would be difficult. And we had difficult conditions. I was blessed, I think, that guys found it tough just the same as I found it tough.”

A point ahead of Woodland and needing at least a par on the par-5 18th to secure the victory, Chalmers made a 2-metre eagle putt after hitting a 290 metre drive followed by a superb 7-iron approach. Woodland earlier had hit an 8-iron into the right bunker and three-putted for bogey.

The victory was the lift Chalmers, a two-time Australian Open champion, was after. This season he’d made just three of nine cuts on the secondary Web.com Tour earning a little over $50,000 and had fallen to No.490 in the world. 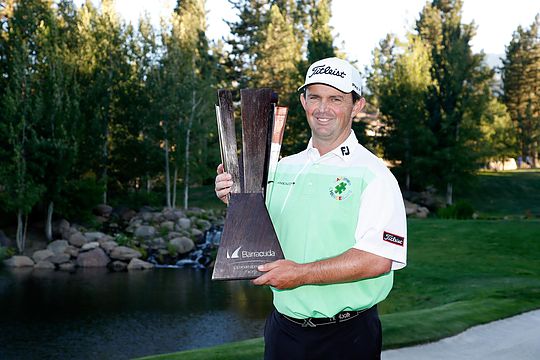 Now the events of one tournament can lead to spoils of victory that is richly deserved for Chalmers, a tour journeyman and one of the most popular players on tour.

“Just to get back on the PGA Tour. I can’t tell you how exciting that is,” said Chalmers. “Forty-two years of age, I turn 43 in October. This is a real fork in the road for my career, and it’s in the right direction.”

Chalmers also earned entry into the Open Championship, the PGA Championship and the Tournament of Champions, as well as a two-year PGA Tour exemption.

The Aussie will now make his fourth appearance at The Open, with his best result to date coming in 2012 at Royal Lytham & St Annes where he finished tied 45th. This is the second time he has made it to The Open through qualification after he secured his place at St Andrews last year through the Emirates Australian Open win in November 2014.

“It was certainly on my mind going into today’s round. I’ve only played in three Opens so it’s always new and exciting for me,” he said.

“I’m hoping to take my whole family over and some friends over there. I played St Andrews last year, so it’s huge.”

Cameron Percy finished the next best Aussie with a tie for 13th position. Aaron Baddeley also secured a top-20 result in a tie for 17th.

Rhein Gibson easily had the shot of the week on the par-5 18th hole. After a monster 338 metre drive, Gibson holed out for two from 160 metre for an albatross which had him finish in a tie for 25th. For the best score on that hole, the tournament awarded Gibson $US100,000 which was donated to charity, including Chalmers’ autism charity MAXimum Chances.