It’s been six years between drinks for Aussie Greg Chalmers…and 13 before that but Jordan Spieth won’t be the only player vying for a third Australian Open crown this November.

The two-time Aussie champ has committed to a third shot at the Stonehaven Cup, and while he won’t enter among the favourites, the gritty WA native says he shouldn’t be taken lightly. 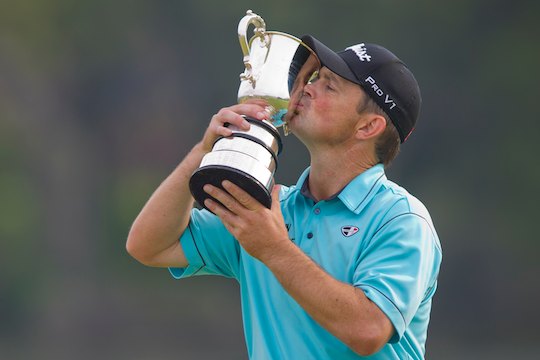 “There are only a couple of tournaments in the world that mean more to me than the Australian Open,” Chalmers told Golf Australia.

“I don’t think too many had me down as a huge chance the couple of times I have managed to win, so who knows, maybe I can surprise a few more in Sydney again.”

Chalmers won his first national title at Royal Adelaide in 1998, beating the likes of Nick Faldo and Fred Couples.

In 2011 he struck again. This time outduelling Tiger Woods and reigning FedExCup champion of that year Bill Haas at The Lakes to claim his second crown.

“Those are two of my greatest golfing memories,” reflects Chalmers.

“There are a lot of great names on the Stonehaven Cup and I’m pretty pumped to think mine’s on there twice.”

And it should come as no surprise.

Chalmers has been a fan favourite over the years, recording an impressive 17 top-25 finishes in his Australian Open career, including six in the top 10, to go along with his two titles.

Last year, at age 42, the affable left hander had his long-awaited American top-tier breakthrough in his 18th year and 386th start on the US PGA Tour.

“We’re clearly excited to have announced a couple of top-10 players recently in Jordan Spieth and Jason Day, but the tournament’s growing reputation is based on field depth, too,” Hardess said.

“Greg is a proven winner around the world over a long period and we know he has plenty of fans at home who’ll fancy his chances again.”