The trio traded pars and birdies before Ormsby was eliminated in the third play-off hole and it took Chalmers until the seventh playoff hole to seal the win. 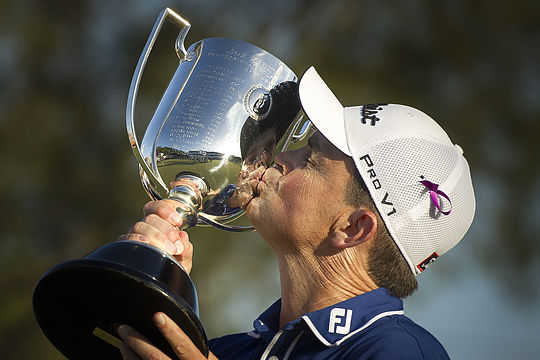 Earlier, an 8-under 64 had given Chalmers the sole clubhouse lead, which he held until the penultimate group of the day when Ormsby holed a 20-foot putt to create a playoff.

“It was one of those perfect days,” said Chalmers, who recently just lost his status on the PGA Tour.

“I got away to a fast start, then things just progressed from there. I was holing 50 and 60 footers out there and they were just going in. I felt very comfortable out there with my flat stick.”

Adam Scott had birdied 15 to join Chalmers in the lead, and he had the last shot to clinch the title with a birdie on the 18th.

Scott hit his tee shot into a bunker, then his approach ran through the green, leaving him a tough up-and-down. The chip fell two feet short, but Scott finished off to ensure a three-way playoff.

It was Chalmers’s fifth Australasian Tour victory with the 41-year-old previously winning the Kirkwood Cup in 2011, which added to his 1998 and 2011 Australian Open titles. Yet this was his hardest fought victory to date.

“Fatigue was creeping in,” said Chalmers about the seven hole play-off where he hit just one fairway, landed in the bunker five times and the trees once.

“My hands were beginning to get a bit quick. I did not have the greatest control out there, but though sheer tenacity and a bit of luck here I am.”

New Zealander Michael Hendry was fourth at 9-under followed by American Scott Stallings a shot further back at 8-under.

Fellow American Boo Weekly was in 6th position at 7-under with Matthew Giles and overnight co-leader Scott Strange finishing in 7th position five strokes behind the leaders.

Chalmers also took out the Australasian Tour Order of Merit, which guarantees starts at the WGC event in the US next season.

“I lost my status in the US this season, so I need all the help that I can get,” said Chalmers.

“I’ll probably have fifteen or so starts, so to get an extra three is an added bonus. This is a sweet victory and one I’ll look back on with fond memories for sure.”