World No.1 Dustin Johnson has made a last minute exit from tomorrow’s $8,100,000 AT&T Byron Nelson at TPC Craig Ranch on the outskirts of Dallas-Fort Worth in Texas.

The 36-year-old will be replaced in the field by none other than Australia’s Greg Chalmers, who last played the event in 2018 where he missed the cut. 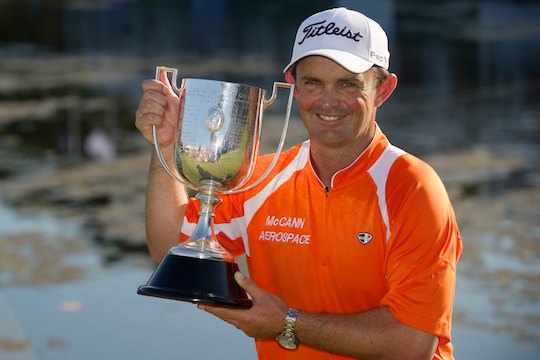 “It is with deepest regret that I must withdraw from this week’s AT&T Byron Nelson. Unfortunately, the knee discomfort I occasionally experience has returned and after consultation with my team and trainers, I feel it is best that I remain at home and focus on my rehabilitation work,” said Johnson in a PGA Tour statement.

“I am not pleased about this situation, as I was really looking forward to playing this week. You have my word I will be back in the future and in the meantime, I wish you best of luck for a great week at the TPC Craig Ranch. I am truly sorry I won’t be there with you.”

Johnson’s last played the tournament in 2017 where he finished in a share of 13th.

Chalmers has made just US$61,304 this season from three cuts and has a best result of T22 at the Puerto Rico Open in late February.

Chalmers, a two-time Australian PGA and Australian Open champion, was quick with his laconic comeback.

“The parallels are uncanny.”

Also joining the field will be Japan’s Hideki Matsuyama. The Masters hero is returning to the PGA Tour for the first time since his historical one-shot win at Augusta National early last month.