Chalmers last won the Australian Open at Royal Adelaide in 1998, and today held off John Senden and a fast-finishing Tiger Woods in a riveting final round at The Lakes Golf Club in Sydney. 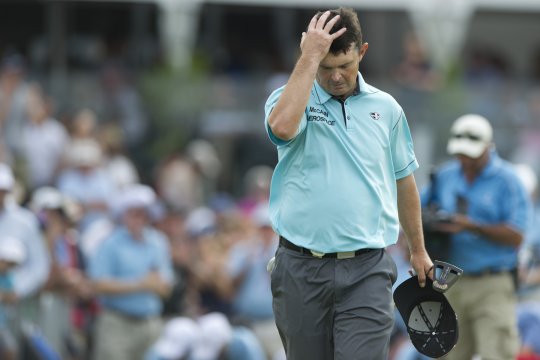 It was only his third win on the Australasian PGA Tour along with his two victories on the secondary US Nationwide Tour.

“To win it once, you can stumble into it,” said Chalmers.

“But to win it twice, with this field, you can talk about Tiger and it being the strongest field we’ve had for a long time, but this is special.”

Chalmers placed the victory on his consistency over the final two rounds.

“To go out there and get it done over the last two days and shoot eight under for the weekend, that does something for me.”

Chalmers, who is ranked 215th in the world, was runner-up when Woods won his last tournament at the Australian Masters two years ago at Melbourne’s Kingston Heath.

Chalmers hit the front at the third hole today and held it together for a notable victory over a field stacked with US PGA Tour stars, here for next week’s Presidents Cup at Royal Melbourne.

Woods, a 14-time major champion, had a closing 67 for an 11-under 277, which means he has still not won a tournament since the 2009 Australian Masters.

Defending champion Geoff Ogilvy stormed home with a sizzling 65 to finish in a five-way tie for 4th place, while Adam Scott was among a group of players at nine under.

American Nick Watney, Nick O’Hern and Jason Day equalled with Scott and Ogilvy while Aaron Baddeley and Ryan Haller finished a further stroke back at 8-under-par in a share of 9th.

Reigning US Amateur champion Kelly Kraft pipped Tasmanian Ryan McCarthy by a shot to finish as the top amateur at three-under par.

“It’s been a long time and unfortunately I haven’t played a lot of tournaments in between. I had a chance and I kept telling myself I need to post 13, 14 under to get it up there and see what happens.”

It was a moving experience for Chalmers, who was reduced to tears during the presentation ceremony.

Chalmers can now place his own name alongside some of the legends of the game as a multiple Australian Open winner.