Champ back in the winner’s circle at 3M Open

Cameron Champ fired a closing round 5-under-par 66 on Sunday to take out the 3M Open.

It was Champ’s third PGA Tour victory after claiming the Sanderson Farms Championship in 2018 and the Safeway Open in 2019.

Champ’s victory came at just the right time having made just ten cuts in 22 events and only one top-10. In a stretch from May to June, Champ missed four cuts and withdrew from the Memorial; in the last event of that span he shot 71-77 at the Rocket Mortgage Classic in Detroit, but followed it up with his best finish of 2021 with a T11 at the John Deere Classic two weeks ago.

“I just feel like the last two months I’ve been in a lot better head space and kind of realising what is truly important to me and what is not,” remarked Champ.

“I’ve just been sticking to it and to get this win, it’s something special. I know this is the player I can be and again it’s allowing myself to be that player.” 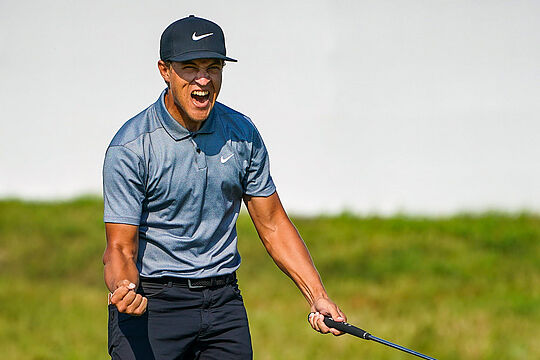 Oosthuizen held the early Sunday lead only to see Champ snatch the victory. It was the South African’s fifth top-3 finish in his last seven starts on the PGA Tour.

Champ joined Collin Morikawa, Jon Rahm and Bryson DeChambeau as the only players aged 27 and below to win in each of the past three seasons on tour. He jumped from 142nd to 49th in the FedEx Cup standings, with the top 125 qualifying for the playoff opener.

Cam Davis finished the best of the Australians closing with an impressive 64 to move 39 places up the leaderboard to finish in a share of 28th position. Cameron Percy also fired a tasty closing round of 67 to make his move into a share of 34th position.

Aaron Baddeley shared 51st position to be the last of the Aussies to make the weekend.

Cam Davis’ 2021 season is shaping to be one of his best following his win at the Rocket Mortgage Classic earlier this month. He has made every cut since and has moved to 32nd in the Fedex Cup and 65th on the world rankings.

The Aussie has also made a nice earner having pocketed US$2,598,281 with three top-10 finishes.