American Cameron Champ collected his second PGA Tour victory following Sunday’s win at the Safeway Open. It was his second title in 28 starts and has made him a multiple winner before turning 25.

Champ made a one-metre birdie putt on the par-5 18th hole for a one-stroke victory over Adam Hadwin at Silverado Resort. Champ closed with a 3-under 69 to finish at 17-under.

Starting the final round with a three-shot lead Champ was slow out of the blocks and made a few mistakes during his opening nine, not hitting a fairway until the 12th hole. He bogeyed the 8th, but rebounded with a birdie on the 9th before a short chip-in for par on the 11th after chunking his approach shot.

Champ was then able to dig deep clinching a number of clutch pars on the back nine to hold off a charging Hadwin, who birdied each of his final three holes to pile the pressure on Champ.

“I just kept grinding,” said Champ. “I got some key up-and-downs. The chip-in on 11 was huge, and the up-and-down on 15 just kind of kept my round going.”

Twelve months ago Champ won the Sanderson Farms Championship and was then touted as ‘another young bomber’ with his massive distance off the tee. Yet the results did not automatically follow and even younger players like Matt Wolff, Collin Morikawa and Viktor Hovland emerged from the pack. 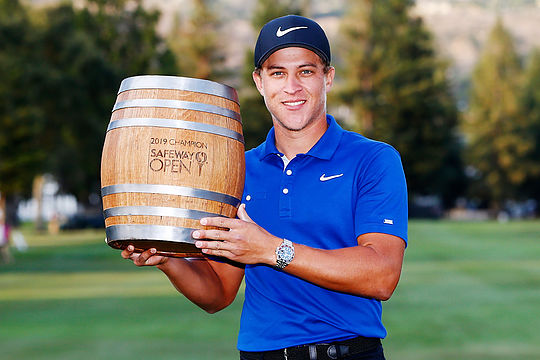 Sunday’s victory, on a course where he played in a junior event at 13, came on the back of a rather lacklustre start to the 2019 calendar year with no top-20 finishes and 11 missed cuts from 20 starts. But Champ was quick to point out it was a victory he’ll savour given his family situation with his grandfather, who taught him the game, in respite care battling stomach cancer.

“No matter if I win one more tournament, 10 more tournaments, no matter what it may be, this will be the greatest victory of my golf career,” said an emotional Champ.

Marc Leishman, who withdrew two weeks ago from the Greenbrier, carded eight birdies to fire a closing 65 and earn himself a third-place finish to be the best of the Aussies. Leishman was quick to point out his back issues were abating and that he’s ready for the Presidents Cup in Melbourne scheduled for December.

“It’s feeling good,” said Leishman. “I’ve been getting treatment. It was a little stiff at the start of the week, but it got better as the week went on, which was nice. Yeah, feeling good again. Happy with how I’m striking it.”

Cameron Percy also had a good week with a closing 67 moving him 15 spots to grab a share of 7th position.

Adam Scott also made a Sunday move firing a 68 to move 19 spots to record a tie for 17th. Scott had opened the week with a 65 but quickly fell away with back-to-back 73′s.

Aaron Baddeley and Rhein Gibson shared 33rd position at 7-under-par to round out the Australians making the weekend cut.