The 23-year-old won in just his ninth career tour start, closing with a 4-under 68 for a four-stroke victory. He finished at 21-under in the wire-to-wire victory at the Country Club of Jackson but it was not all plain sailing for Champ.

He quandered a four-shot lead in the final round before steadying himself with four straight birdies from the 13th hole to fend off Canada’s Corey Conners.

With the victory, Champ earned the biggest payday of his nascent pro career, collecting US$792,000. It was his second professional title after winning on the Web.Com tour last July at the Utah Championship.

Champ is known for being one of the longest hitters on the PGA Tour. 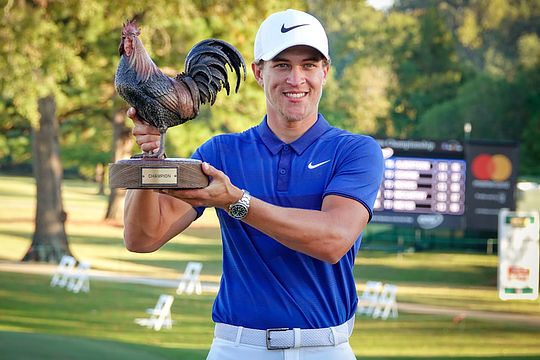 In 2017, Champ registered a 129.79 mph average clubhead speed in his debut at the OHL Classic at Mayakoba.

All season Champ has been booming his drives to sit third in driving distance at 299 metres and on Sunday broke his driver on the range just before his round, calling for his back-up driver.

But as the saying goes – drive for show, putt for dough – and it was Champ’s amazing putting that got him across the line for his maiden PGA Tour win.

“I’ve kind of been a streaky putter at times, so I’m just trying to slowly grow other parts of my game,” said Champ. “Short game and putting, but mainly putting. Just to see those putts go in and the confidence it gives me through the rest of my game really helped this week.”

Champ closed out his victory with one final stunning moment on No. 18.

After another long, wayward drive, he punched a 140 metre recovery shot from the left rough that stopped just two metres from the hole. He then made the putt for yet another birdie.

“The front side, there were some nerves, but on the back side I brought it all together and finished strong. It was awesome,” said the 23 year-old, who will be fully exempt on the PGA Tour through the 2020-21 season.

Carlos Oritz fired a round-of-the-day 64 to finish five off the pace in tied-third alongside Sam Burns, while Scotland’s Martin Laird ended the week in a share of seventh after a final-round 70.

Curtis Luck was the best of the Aussies finishing in a tie for 50th while Stuart Appleby finished in 68th position.