Chinese-Taipei’s Chan Shih-chang has taken out the Blue Canyon Phuket Championship to become the first winner on the Asian Tour following a 20-month hiatus due to the COVID-19 pandemic.

The 35-year-old shot a final-round 4-under 68 to finish on 18 under-par to defeat Thailand’s Sadom Kaewkanjana and South Korea’s Joohyung Kim by one shot. Sunday’s victory was Chan’s third on the Asian Tour and 16th professional victory which includes one win on the European Tour in 2016 at the Kings Cup.

Chan had started the day tied for the lead with Sihwan Kim from the United States, but with solid birdies on the par 5 13th and 16th the tournament turned into a two-way shoot out between Chan and Sadom Kaewkanjana. A par on the last was enough for Chan to claim the victory after Kaewkanjana missed the green with his approach shot. 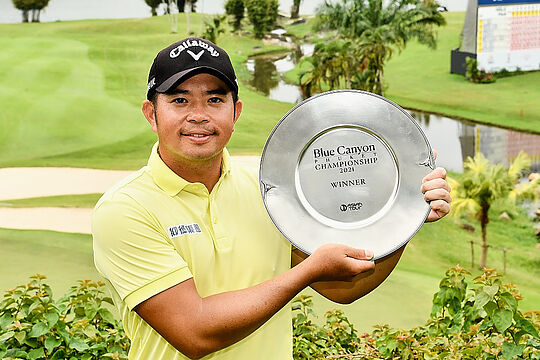 “I am so happy to be back after the problems everyone has had with COVID. My front nine was not very good but an eagle on nine turned things around.”

Scott Hend finished the best of the Australians in a tie for 4th and Travis Smyth finished in a share of 10th position.

“I must say @BlueCanyonCC is one of the more demanding golf courses I have played in the last few months. Even with Lift Clean and place, the rain and wind made it tricky…it’s good to be back,” tweeted Hend, who moves into 22nd place on the Order of Merit. Fellow Aussie Wade Ormsby still leads the way despite Chan coming within $25,000 of knocking the South Australian out of the top spot.

The Asian Tour has planned three more tournaments including this Laguna Pluket Championship followed by two events in Singapore in January 22 that will round out the 2020-21 season.